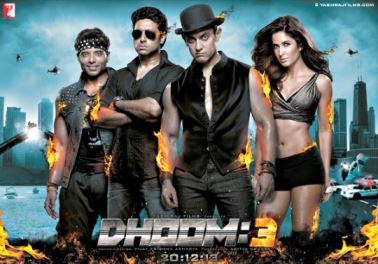 It has been decades since Aamir Khan has been in the Bollywood industry but in his whole career, never had he enacted the role of a villain. But this record has been broken as Aamir has portrayed a negative role in “Dhoom 3”, said to be one of the most anticipated flicks to come out on silver screen in 2013.
Jackie Shroff plays the role of Iqbal, a modern circus owner as well as a magician who commits suicide after running into huge debts with Western Chicago Bank. Aamir Khan portrays the role of Iqbal’s son sets out to avenge the death of his father by robbing the bank multiple times in order to forcefully close it down without being caught. As a trademark, he always leaves a note in Hindi on one of the walls of the bank. The movie has Aamir Khan performing death-defying stunts on his bike as he goes on to loot the bank repeatedly.
This is where two supercops Jai & Ali flown in from India in order to investigate and nab Sahir (Aamir Khan). All of the special effects as well as the action sequences have been performed in the best possible manner in order to enthral the audience. Dhoom 3 also features the song “Malang” which has been revered as one of the most expensive song sequences to be shot in Bollywood history. In the song, Aamir Khan and Katrina Kaif have performed outstanding acrobatics. All of the songs are quite hippy which makes Dhoom 3 a must-watch.