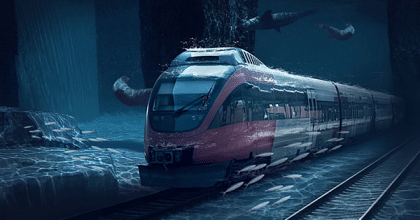 Have you ever travelled in a ‘Mumbai Local’ at the peak hour in the morning? If you haven’t, let me draw the scenario for you – a typical train coach which is designed to carry 200 people ends up carrying approx 800 people every morning. Mumbaikars dream of travelling in a bullet train while being in such a ‘suppressing’ situation. “A bullet train with world-class amenities. Maybe a train that undergoes the sea for a few kilometres and is made up of candy.” Hey, wait! That’s going to be a reality! Sans the candy part, of course.

We’ll soon be able to get the kick of riding under the ocean while travelling between Mumbai and Ahmedabad in what we anticipate is going to be ‘the first bullet train of India’. The 508 kilometres distance between these two cities will be covered in approximately 2 hours. Currently, the fastest train on this route, the Duronto Express, takes almost 7 hours to cover this distance.

The high-speed bullet train will have a 21 km tunnel built under the sea on a stretch between the Thane Creek and Virar. Rest of its corridor is proposed to be on an elevated track, just like the Metro Rail. The ambitious project will cost around Rs 97,600 crores, whose 81 percent will be financed by Japan as a loan to our country. This loan will be re-paid over a time-span of 50 years at an interest rate of 0.1%. Indian Railways will invest approx Rs 9,800 crores and the rest of the cost will be beared by the two states (Maharashtra and Gujarat).

An official associated with this project stated that the loan agreement is to be signed by the end of this year and the construction work will begin by early 2018. It is estimated that the project will be completed by 2024-25. According to the current plans, two types of trains will be introduced – 10 coach trains and 16 coach trains with capacity to carry 1,300 and 1,600 passengers respectively. These trains will run at a speed of 350km/hour and while covering 508 kilometres, they’ll halt at 11 stations.