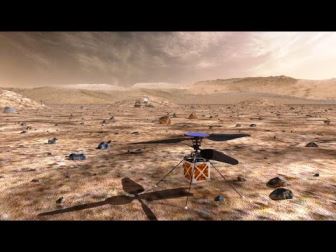 The world is full of drones these days. Google, Facebook, Amazon and just about every other rich company seems to be interested in getting some drones to perform one activity or the other. In the meantime, NASA is developing a drone of their own to explore Mars.

So far, in our quest to explore Mars, we’ve mainly used rovers. But since rovers are clunky and slow, we’ve only been able to travel a total of 65 kilometres on the surface of the red planet, which is not even a blot of the total 145 million square kilometres of area that lies unexplored.

To make progress faster, NASA is now considering air travel. A Martian flyer called Prandtl-m is now in concept phase, named after German aerodynamicist Ludwig Prandtl. Having it take off on its first flight in Mars is still years away, so there’s plenty of work to do yet. The main problem that scientists have to grapple with is how to make an airplane fly in the thinner Martian air with less gravity than on Earth.

There was an earlier prototype called ARES (Aerial Regional-scale Environmental Survey of Mars) that aimed to conquer the air of Mars, and it appears that Prandtl-m is a later version of ARES. Both machines are mainly composed of flying wing, with an extremely light body to maximise lift generation. To replicate the thin air of Mars during testing on Earth, NASA will release their plane from a balloon at an altitude of 100,000 feet.

There will be three test launches of the 1.6-pound-heavy drone. The first launch will inspect how well the Prandtl-m can fly. On the second launch, the plane will be accompanied by small payloads such as mapping cameras or sensors. A third launch will release the drone from a height of 450,000 feet above Earth, so that it can glide its way into the atmosphere.

Someday, drones such as the Prandtl-m will explore Mars, paving way perhaps to much more sophisticated aerial robots. And then, on some distant day into the future, maybe human beings will set foot on the red planet too.