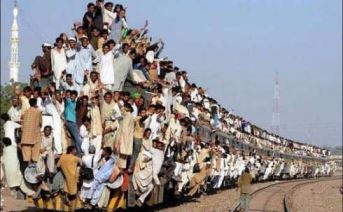 There was an argument on the dinner table last night about how incredibly different or weird things are in India. I said “Indians are crazy, we are too noisy, sentimental and cold at the same time, plus we don’t respect the privacy or comfort of others”. There was moment of silence, until a fork whizzed past my ear. I looked at the red little face of my sentimental older brother (who had just seen Manoj Kumar’s ‘Purab aur Paschim’) as he spattered on me a barrage of trivia about India he had learnt from the film. Well, that was the end of the discussion.
But all night long I was puzzled by the way things happen in India.  A number of questions popped up, like why a guy who drives a Mercedes would flash a fake ‘Union Id’ to avoid paying ten rupees in parking. It is the same thing as peeing right below the sign that says “Do not urinate here”; it gives a pleasure of doing something which is denied.  It almost feels as if this is a country of daredevils who like doing what they are denied. If you look at a local train approaching from the front, you will notice floral patterns lined up on both sides. Those are actually people, hanging from the door not because there isn’t enough space inside, but because riding with the wind is in our blood. One of those amazing moments while travelling in train is when you hear an announcement saying: “please don’t ride on top of trains, it can be dangerous.” May be it is because people are so innocent here that you have to tell them everything, like “please don’t push passengers” and “please do not spit inside the train”.
Some would say that there isn’t enough space. Honestly, how can you fit over 1 billion people (and equal number of ‘holy cows’) into a country half the size of Australia? Indian roads almost prove this fact. A two wheeler, meant for two people, is actually a car in disguise, designed for four, which is why you will often see four people riding on a timid bike with a matter-of-fact looks on their faces. Maybe this is why we are so efficient in space management. If you are travelling in a local transport like a bus or a three-wheeler, fondly called the ‘Autorikshaw’, the rule is – ‘if there is enough space to see the writing on the seat, there is enough space to sit’. So don’t be baffled if someone sits or falls into your lap and then asks you to move a little. It may seem impossible but you will succeed in creating some space. This is what Indians do, everyday; they achieve the impossible.
Then I thought it’s all about the attitude. People of India believe they can do anything and they prove it every now and then. With a week to go for the 2010 Commonwealth Games in Delhi, grounds were still dug up and the hostels were still occupied by stray dogs. But the ability of Indians to turn sand into gold-dust at the last minute won the accolades of the entire world for a job well done. It’s called the ‘Jugaad’ ability, which is 100% home grown and found only in India. Tourists love India because of its diversity and a mind-boggling mix of cultures. Our most progressive cities still give the feel of a happy cattle farm, with cows posing like supermodels in the dead centre of busy roads. Where else would you find cities with the feel and smell of a farm?
Wonder why Indian roads are always clogged? It is because people don’t like being restricted to the boredom of their houses, which is why they venture out on the streets for some drama and entertainment. On Indian roads, you will see action, comedy and romance all in a matter of thirty minutes. Keep your eyes open for guys (straight guys mind you) holding hands, taking a walk along the sidewalk, fiddling with each other’s fingers and passing ‘jolly good’ comments at girls. Not a romance fan? Try overtaking someone and you will get some action. But the best and the most harmless way to be entertained on Indian roads is by following trucks. Backs of trucks are like comic strips, colourful and filled with either innocent grammatical mistakes like “Use Diaper at Nite” (instead of ‘dipper at night’), or poetry like “Bhagwaan bachaye teeno se, nasha, jua aur haseeno se” (Lord save from these three, intoxication, gambling and pretty girls). Pure entertainment for those who follow.
I began by making an account of things that make India unique in a hope that somehow I will be able to answer the ‘whys’ that surround this quality. Forget about finding the answers, I realise now that it is impossible to even isolate the collective ambiguity veiling this nation. I just wish I could apply some of the infallible jugaad to complete my quest and I hope what I find isn’t as mystifying as India itself.