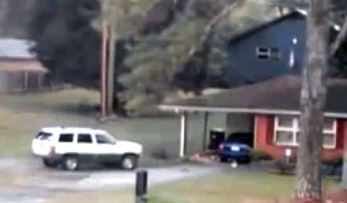 It is said that marriage is based on the institution of love, faithfulness and prosperity. But if one of the two resorts to infidelity, then the consequences might be ugly. This is what happened in the case of one married couple where the husband found his wife cheating on him with another man and thus, went into a blind rage. The whole saga has been captured by a woman who was witness to the incident. The husband after knowing the truth sat in his car and crashed into another car before smashing the vehicle into his own home.
The whole footage has been uploaded on YouTube by annahill3001 and has gone viral over the internet. The viewers count has crossed 1.5 million recently ever since it was put up on the website a week back. The credibility of the whole event has not been ascertained as of now and some are still considering it to be a hoax. There have been instances in the past where a fake video has been put on online and made viral for the sole purpose of earning viewership through that video. This one might be of the same category as has been ascertained by a few video critics online.
Way back in August this year, a baseball team of American Minor League accepted that it had indeed staged a marriage proposal that was rejected. This was just a publicity stunt and nothing more. The video had gone viral over the internet in a span of a week.