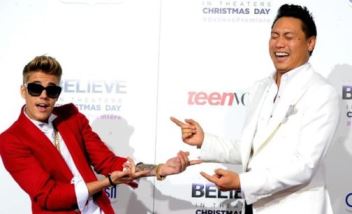 The fan base of Justin Bieber commonly referred to as “Beliebers” might be thinking that they know everything about the teen star but this certainly isn’t true. Even if these very fans are head over heels for the star and tend to keep themselves deeply invested in his life cycle, they never got to see the emotional side of the star until recently. All thanks to his new movie “Believe” directed by Jon M. Chu. Apparently Justin Bieber broke into tears during a

particular segment of the movie. So Jon M. Chu revealed that the particular segment of the movie which made the star emotional involved Avalanna Routh, commonly referred to as Mrs. Bieber.
Avalanna Routh was known to be the youngest fan as well as friend of Justin Bieber but she passed away last year due to cancer. She was 6 years old when she lost the battle as she was diagnosed with a rare teratoid rhabdoid cancer which happens to only 30 people in the US in a year. Jon goes on to add that the Avalanna story was one of the most emotional phases of the star’s life as he was really close to her. Henceforth, Chu decided to put the story in the movie in order to show the fans how much Bieber loved her. Bieber even broke down twice while performing on stage and in one sequence, dedicated the song “Lonely Girl” by keeping a photo of her on an empty chair.