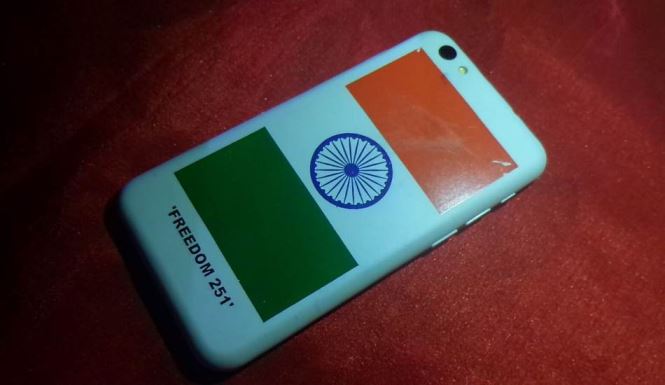 The Freedom 251 phone has been lauded as a great example of Make in India being a success. But like most things that sound too good to be true, once you scratch the paint off the surface, the rusted metal shows through. We did a bit of scratching, and here’s what we found.

Unless you’ve been living in a monastery with no media links, you will know that a few days back, a smart phone called the Freedom 251 has been launched, where an inventor named Mohit Goel has made the headlines for developing a smart phone that costs just 251 Indian Rupees to purchase. That’s less than 5 Australian Dollars.

However, like with almost everything, things are not always what they seem. Here are a few under-the-hood items that leave one scratching their heads about the Freedom 251.

1. It does not really cost 251 rupees
The cost of production of the phone, as admitted by Mohit Goel in one of his many interviews, is not 251 rupees but around 2500 rupees. The director said that they hope to bring the per unit cost down to 251 using innovative marketing strategies, economies of scale, reduction in duties and by creating a niche in the e-commerce sphere.

So the price reduction did not come about due to a technological innovation, but in the hope that they will be able to market better than the competition.

2. Press samples have another company’s logo on them
The biggest alarm bell with the whole thing is that when the press received samples of the product, the phones were found to have been painted to conceal the logo of the company, Adcom. The features of the Freedom 251 and the model are very similar to one of Adcom’s models, the Ikon 4.

3. Build and features mimic the iPhone
Reduce price in technology should happen by innovative ways in which the core problem is solved, or by redefining the problem, instead of by disrupting the existing market on price alone and taking a loss in the hope that economies of scale would eventually work out. If your product does not do things differently or does not offer anything what existing products do, it will burn itself out.

The Freedom 251 has borrowed hardware and software elements from the iPhone. Even the icons are iPhone copies. So proclaiming it as an innovation is not quite true.

4. The website is filled with glitches
Not surprisingly with things in India, where websites of banks and government agencies are horribly unfriendly for users, the website for Freedom 251 is similar. It has many glitches, not least of which allows you to purchase fractions of the product. For instance, you could order 0.5 of a Freedom 251 for half the price.

5. The phone is not available in stores
This is the biggest warning sign of all. For a company that hopes to achieve vast economies of scale, being unavailable in physical stores is suspicious at best. The only place where the phone is available now for purchase is the afore-mentioned glitch-ridden website. No, they’re not even available on online stores such as Flipkart and Amazon.

What to make of it all?
What, indeed? This phone has been heralded as the beacon of the future where Make in India can flourish, but the truth is that the reduction in cost has not been achieved by technological innovation but hinges on a hope and a prayer. We hope that in the future, entrepreneurs focus on problem-solving rather than hype, because only then will Make in India become a reality.