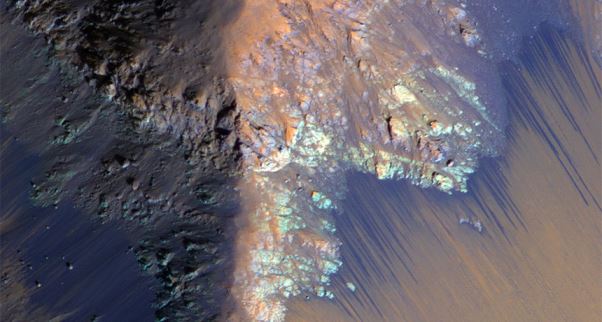 Mars has held the most fascination for Earthmen, both for science fiction writers and also for scientists. Finally, NASA claims that it has found conclusive evidence that proves that liquid water flows on the surface of Mars. This article gives you details of where the water comes from, and what this discovery means.

For the longest time, the people of Earth have had the weirdest fascination with Mars, our next door neighbour in the solar system. Science fiction writers invariably set their alien stories on Mars. As recently as 2015, a Hollywood movie, The Martian, tells the story of an Earthman who survives on the red planet for a whole year by growing potatoes.

There has been a theory floating around that liquid water exists on the surface of Mars, but it has been notoriously difficult to prove. Finally, though, NASA has positive evidence that Mars houses liquid water.

Evidence for ice has existed for a while
It must be confirmed that this is not the first time that researchers are getting excited about water in frozen form on other parts of the solar system. Europa, one of the moons of Jupiter, is known to contain frozen seas under its surface. But the question that has always puzzled scientists was that whether liquid water is present on the surface of Mars.

Data returned from MRO
The Mars Reconnaissance Orbiter (MRO), a spacecraft that studies the planet from orbit, has analysed the chemistry of dark streaks that are known to appear seasonally on the planet’s surface. It has long been suspected that these are caused by salty water flowing downhill on Mars’s surface. Spectral data relayed back from the MRO confirms these guesses.

Not the first time
Discovering water on Mars has been a bit of a commonplace occurrence over the years. Scientists have theorised for years that Mars had on its surface a gigantic ocean about 4 billion years ago. Recent findings from Mars Rover, Curiosity, also suggested that liquid water exists right underneath the Martian surface. Alfred McEwen, a planetary geologist at Planetary Image Research Laboratory, jokes: ‘Congratulations, you’ve found water on Mars – for the thousandth time.’

Summer day temperatures suitable for water
Though the average temperature of a Mars day is around -80 degrees Fahrenheit, on a summer day near the equator, temperatures can reach levels of around 70 degrees Fahrenheit. These are perfect conditions for liquid water to exist, say the researchers. They postulated that in such conditions, liquid water filled with perchlorates – a type of salt – runs downhill on the planet’s slopes. The brine solution has a much lower freezing point than water, so it stays in liquid form even after the temperatures drop.

What this means
The liquid water could be coming from any one of three sources: the perchlorates could be pulling water out of the hair during humid days, or the water may be coming from a subsurface reservoir of ice that turns into liquid when it comes in contact with the salts, or there is a possibility of an aquifer that is generating the water needed. If this evidence is unambiguous, then it increases the possibility of discovering microbial life on the red planet.