If you keep losing internet connection or find the speed unsatisfactory, then you’re in good company. CHOICE’s latest internet service provider satisfaction survey of 2017 shows that 62% of Aussies in the last half of the year have experienced problems with their internet with speed and reliability being the main impediments.

Not even NBN users have been spared as they also claim to face problems with slow speeds and drop outs three-quarters of the time. When invited to rate the country’s Internet Service Providers (ISPs) regarding how satisfied they were with the services, Australians came up with the following scores:

The top 5 providers included Internode, which topped with a score of 81, iiNet at 78, while Optus and TPG had 75 and 74 respectively. Telstra had a below average score of 70 and was found to charge 92 per cent more than its competitors for certain services. Despite the less than impressive statistics, Telstra had the highest subscription rate with 37% if Australians using them as their primary service provider.

Another ISP that fared poorly was Dodo which came behind Telstra with a score of 69 – the lowest in the overall satisfaction category.

Below is a look at how the ISPs performed concerning the different service categories. 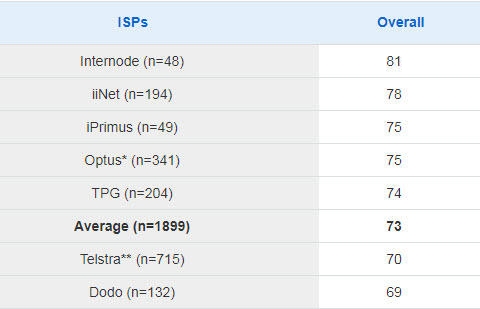 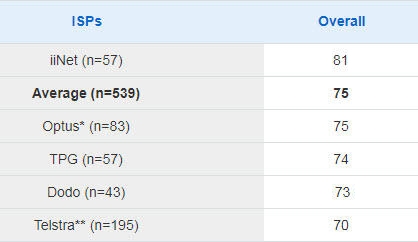 As for the ISP that gave the best value for money, Choice came up with this list: 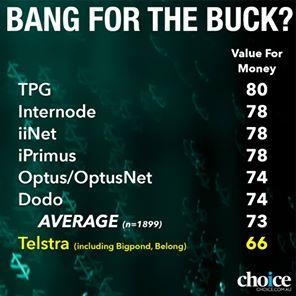 Choice has launched a project for monitoring broadband meant to gauge whether customers get value for money by monitoring how well homes across Australia are doing when it comes to their internet connection.