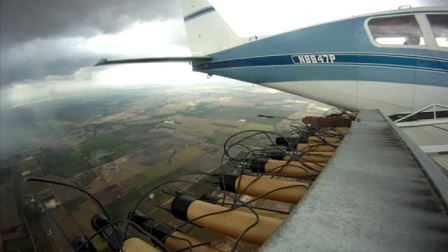 Water conservation is the most important buzzword in the dry parts of the world, and they don’t come drier than the UAE. In recent times, the country has turned to science for ideas on how to make more rain, and among other things it is toying with the idea of building a man-made mountain.
For the duration of humanity’s history, the word ‘rainmaker’ has been used to describe a miracle worker, someone who can perform the impossible. The process of rain has always been associated with the inscrutable moods of the Gods, and it was left to us to accept what we’d been given.
But in the UAE, the driest country in the world, people are taking matters into their own hands. They’re trying to become rainmakers, to will rain to fall whenever they wish so that their dependence on water may not be so stark as it is now.
Is it possible, though? In theory, yes, say scientists. There are two techniques that the UA is trying out.
Building a mountain
The country has already invested $400,000 to study the feasibility of a man-made mountain and how it could affect the rainfall in the area. The researchers currently are said to be in the ‘detailed modelling study’ phase of the project.
While this idea may sound far-fetched at first, there is a real meteorological concept called ‘orographic precipitation’, where moist air rises up one side of the mountain, cools and forms clouds. These clouds then produce precipitation and causes rainfall on the side of the mountain facing the wind.
If natural mountains cause rainfall, why not man-made ones? The only questions to be answered are how high, what angle, what material etc. The actual building of the mountain may turn out to be an expensive affair (initial quotes run up to $432 billion), but this could be the first step in weather control in the region, and a model for dry countries worldwide.
Cloud seeding
The UAE invested $560,000 on 186 cloud-seeding projects. Cloud seeding is a technology that dates back to the 1940s, where a cloud’s ability to cause rainfall is enhanced by injecting it with particles that condense water and create precipitation. A meteorologist claimed that cloud seeding played a part in March’s record rainfall, during which 11 inches of rain fell on a single day.
However, the larger scientific community is still undecided on how effective cloud seeding can be in the long run.
The UAE is trying out these proposals in addition to running large scale water conservation and awareness programmes across the country. Unless something drastic is done, places in the UAE like Abu Dhabi will run out of groundwater reserves in fifty years from now. That’s a problem not only for the nation’s urban water parks and ski slopes, but also for its farmers who populate the rural areas.
In the old Asterix comics, the bard Cacofonix is said to sing so horribly that his voice brought down rain. The UAE would do anything to find someone like that just about now.