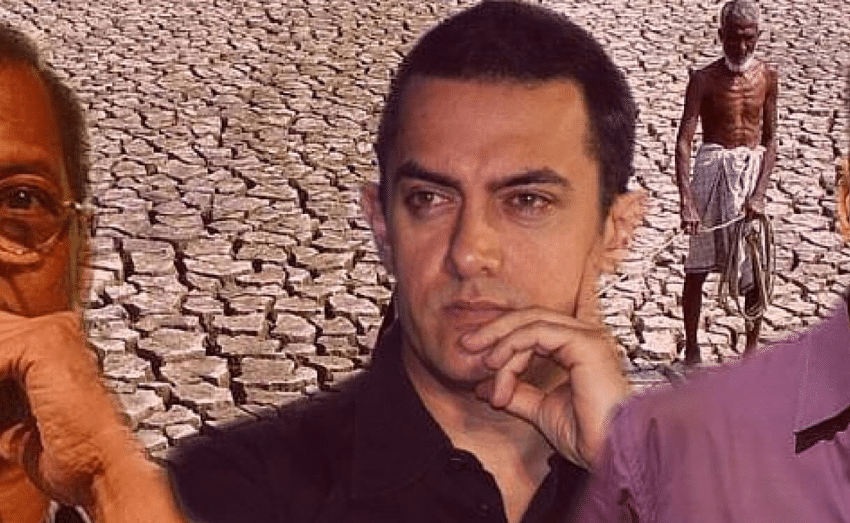 Every year, Maharashtra reckons thousands of cases of ‘farmer-suicides’. On top of that, because of the drought crisis more than 90 lakh farmers are now facing financial difficulties, so much so, that they have either already sold off their lands or are contemplating to do so. There are approximately 43,000 villages in Maharashtra, out of which more than 27,700 villages have been declared ‘drought-ridden’ by the state government. That’s almost 65% of the total! To provide a helping hand in such testing times, some of our Bollywood celebrities have come forward to set an example.

Nana Patekar – Nana and one of his friends, Makarand Anasapure (a popular Marathi actor) started an NGO called NAAM Foundation in September 2015 to help the farmers by providing them with immediate financial relief and alternative employment opportunities. NAAM also works in the direction of establishing more sustainable agricultural practices and also, it provides education to the children of drought-hit areas so that their future won’t get in jeopardy.

Last year in October, the two actors adopted a couple of drought-ridden villages, Gogalgaon, and Dhondalgaon of the Aurangabad district. They helped the widows of the farmers of these areas with financial relief and they taught the villagers to become more self-sufficient and independent. With their fabulous efforts, Nana and Makarand inspired people from all parts of our country to come forward and help the farmers during this time of need.

Aamir Khan – Following in the footsteps of Nana, Aamir too adopted 2 villages in the drought-plagued areas of Maharashtra. He first toured the affected areas to analyze the gravity of the situation and then picked 2 worst affected villages, Tal, and Koregaon which are located in the Satara district of Maharashtra. His NGO, Paani Foundation is working closely with these 2 drought-ridden villages along with 120 others. The aim of the NGO is to spread awareness about water conservation practices to make villages more self-sufficient as far as water sustainability is concerned.

Akshay Kumar – Akshay recently donated 50 lakhs to ‘Jalyukt Shivar Abhiyaan’, a promising initiative by Maharashtra government, which aims to turn villages drought-proof in the coming few years. Apparently, this is not the first time Akshay has stood up for this cause. In September 2015, Akshay donated 90 lakhs to 180 families of farmers, who ended their lives by committing suicide.

This drought, which has plagued the state of Maharashtra, is a consequence of global climatic changes along with a few manmade causes such as unfinished irrigation schemes and overexploitation of available water resources. In order to curb the drought, sustainable agricultural practices need to be adopted by the farmers. Changing the crop pattern they’ve been following is the first step in that direction.