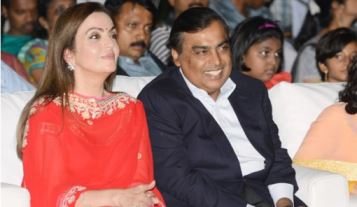 Birthday is just another day for some, but not for the super rich Ambani family especially when it is the 50th birthday of Nitu Ambani, wife of Mukesh Ambani. It was a glamorous star studded affair organised at Jodhpur’s Umaid Bhawan Palace on the 1st of November. Prominent guests arrived a day before to celebrate the dazzling event. The guest included Sachin Tendulkar and wife Anjali, Harbhajan Singh, Gautam Singhania, Lakshmi Mittal, NK Singh, Anil Kapoor, Ranbir Kapoor, Priyanka Chopra, Karishma Kapoor, Rani Mukerji, Shekhar Kapur, Uddhav Thackeray to name a few.
The palace came alive attired with glittering colourful lights in the evening and a Mumbai based band performed the latest Bollywood hits to initiate the celebration. After the chart numbers, Nita Ambani performed Classical dance on the stage for everyone’s admiration. In the midst of sparkling drinks, delicious food, fabulous fashion, and happy chats the guests settled to their comfortable corners.
The birthday became magical when Oscar winning composer AR Rehman performed for an hour with his crew to create the wonderful ambience. A small documentary about Nita Ambani was also screened, which featured most of her close friends and family members telling little stories and wishing her a happy birthday.
At midnight, Nita Ambani dressed in traditional red and cream lehenga-choli, amidst the birthday song, blew the candles on the huge cake before cutting it. The laser lights flashed ‘Happy Birthday Dearest Nita’ on the palace’s wall.