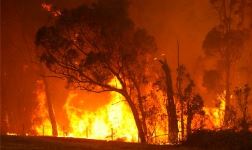 It was New South Wales; the bushfire started its rampage & continued its destructive force, the blaze in the Warrumbungle’s area of north western NSW, near the town of Coonabarabran, was of greatest concern. 51 homes burnt through 53,000 hectares, with 180-kilometer perimeter. And it could go more violent unless the heroic NSW Fire-fighters came into action.

In this cynical age, fire fighting remains a heroic and noble profession. Fire professionals we see in film are often romanticized versions of day-to-day life on the job. But what is the life of a fire-fighter really like? A dangerous, physically and technically demanding career. Take a glimpse, a CALL & a GO because someone has been missing for a while. They don’t think twice but go in to save their life.

Reports say, they work at 900°C and protective equipment weighs close to 20kg. Fire-fighters have shorter life expectancies and are three times more likely to die on the job, due to inherent risks, physical and mental stresses, and exposures to toxic and carcinogenic compounds released in smoke. A new study conducted by the NIOSH on mortality and cancer in career fire fighters shows an elevated risk of several types of cancer – and of all cancers combined – compared to the general U.S. population. Fire-fighters are at much greater risk than the general population for cancer, with the additional responsibilities and training for Hazardous Materials Response, Emergency Medical Services, Homeland Security, Fire Prevention, Public Education and more. In return for providing more and better services to the community, challenges include a work schedule that requires nights and weekends away from home, sleep deprivation due to work schedule and anxiety and a high level of stress due to exposure to trauma and tragedy.