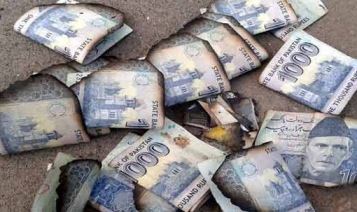 Two Pakistani sisters Naheed, 35 and Rubina, 40 visited the National Bank of Pakistan and withdraw 17 Lakhs from their fixed deposit account around three days ago.

Then they took the money to the front of the bank and burnt it. The police official Afzal Butt of the Bilal town where the women resided said “since the procedure took time, the branch manager told that their demands could not be met on such a short notice.”
The two women were finally handed the money on Thursday after frequent visits to the bank. The police official further added that a passerby tried stopping them from burning currency but one of the two women took out a pistol and said they had every right to burn it.
The police came to the spot and found around 17 Lakhs worth of currency in ashes.
The two women had deposited 28 Lakhs of currency after selling a piece of land inherited by their late father Raja Mohammad Iqbal, killed under mysterious circumstances a few years ago. And since then the two sisters stayed separately. Many neighbours claim that their family has a history of mental ailments.