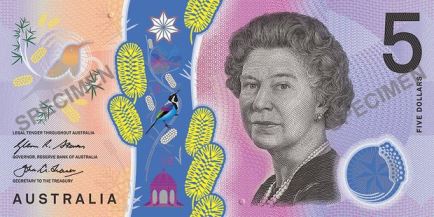 Australian banknotes will be transformed in the coming few months and to begin this process, RBA released the new $5 banknote design on 12th April and plans to bring these notes into circulation from 1st September onwards. They have tried to retain the key aspects of the current design (size, colour, plastic base and personalities featured on the note) so that people won’t find it difficult to recognise the new notes.

The Governor, Glenn Stevens, said that new innovative security features have been incorporated in the latest designs to help keep Aussie banknotes secure from counterfeiting. The distinctive top-to-bottom, blue-coloured window is the first thing you notice in the new design. Besides that, each note in the new series will feature a different species of Australian wattle along with a native bird. For example, the $5 note features the Prickly Moses (Acacia verticillata) wattle and the Eastern Spinebill (Acanthorhynchus tenuirostris).

Other changes that have been introduced in the new banknotes include a detailed, redrawn portrait of the Queen from an original source photograph and incorporation of a new ‘tactile feature’ that will help the visually challenged in distinguishing between different denominations on the notes. To facilitate this feature, the new design will have brighter colours, large contrasting digits and size differentials.

The new designs are being finalised after extensive consultation with the experts from the finance industry. Australian currency is considered as one of the safest currencies in the world since it has seen comparatively low levels of counterfeiting cases in the past several years and to ensure that this continues in the future, RBA has developed a number of anti-counterfeiting technologies for their new banknote designs.

So clearly a lot of hard work is being done to develop the new design, which not only is safer than the previous one but also, more colourful, refreshing and user-friendly. But do people find it refreshing? Many online polls and vox pops suggest otherwise! While some find the new design ‘a little too colourful’ for their liking, some thought it’s not the real design at all. One woman’s reaction was – ‘it looks like Monopoly money’.

People showed their shock and disgust via Twitter as well –

“Looks like golden staph germs from a petrie dish. How bad can banknote design be?” – Ben Sandilands

If you are thinking what will happen to your existing banknotes, there’s no need to panic since all banknotes issued by RBA will remain legal and you can continue to use them as of now.