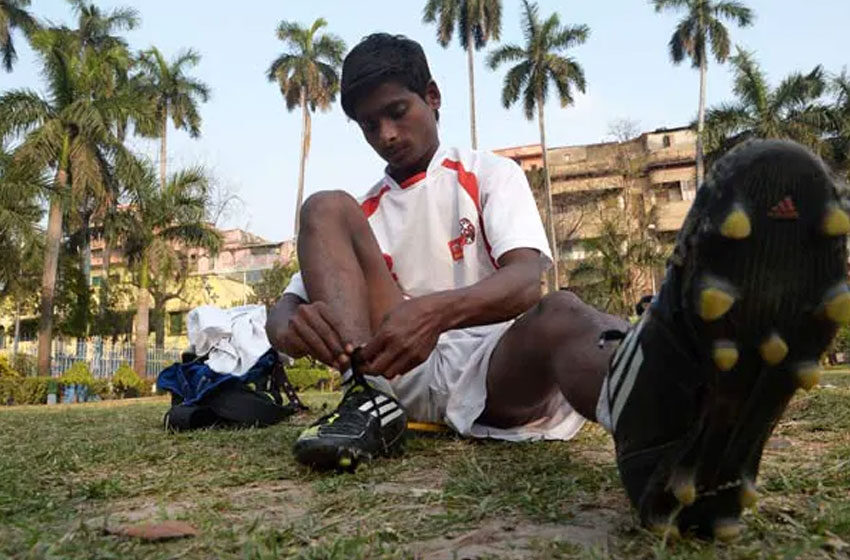 Two teenagers from India have been chosen to take part in the Manchester United Football Club camp. 16-year-old Rajib Boy whose mother works as a sex worker in the Sonargachi red light area of Kolkata, India and Arka Dey, 16-year-old son of a street vendor have been shortlisted for the training camp which will be held in Great Britain. Rajib spoke to the media and told them that he was dreaming big now after winning the talent hunt and was immensely excited for his career up ahead. Rajib went on to deem Cristiano Ronaldo as his idol and said that his primary focus was always towards scoring goals. Presently, Rajib lives with his mother in a one bedroom flat inside a rugged run-down building.
Ever since his mother entered into prostitution, Rajib has always been heavily derided but he has always turned a blind eye towards those who have castigated him or his mother. Rajib considers his mother as his source of inspiration and orients his entire focus towards football training at his local Kolkata School where he trains hard for hours at a stretch.
On the other side Arka Dey, who lost his father three years ago to Cancer was looking for a way to fulfil the last wishes of his dying father who was an avid fan of Brazilian footballer Pele. At present, Arka trains at his school and helps his mother at a roadside snack stall based in Kolkata. Apparently a generous neighbour has vouched to buy him a football kit with studs before he leaves for Great Britain.
Over the past few decades, English Premier League has made its inroads into India even if cricket is followed religiously here. Liverpool even has its own International Football Training Academy based in Pune which brings budding talents under the spotlight.