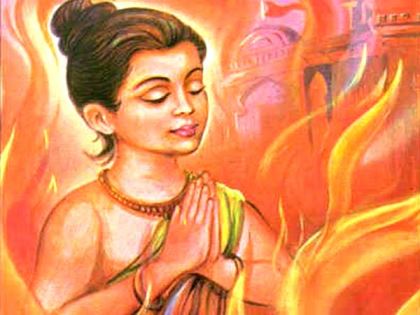 Undoubtedly the most colorful festival celebrated, Holi is all about spreading happiness and indulging in pure fun. For most of us, Holi is the festival of colors that celebrates the spring season. But if you thought that Holi is only about welcoming the spring with delicious gujiyas and a myriad of colors then here’s something that you might have forgotten. Just like most traditional Indian festivals, this Hindu festival too comes with a legend.The legend of Holika.
Legend has it that once there was a demon king named Hiranyakashyap. With years of tapasya (meditation) and prayers, the king had won himself all three worlds – heaven, earth and hell. All this power made him so proud that he began to think of himself as God. He even wanted his subjects to worship him instead of Gods. However, the all-powerful king had a Vishnu devotee son, Prahlad. The king made every effort to destroy his son’s belief in Lord Vishnu but failed repeatedly. Prahlad refused to worship his father as God and stayed devoted to Vishnu.This angered the mighty demon king so much that he decided to take the help of his evil sister – Holikato get rid of Prahlad. Hiranyakashyap ordered his young son to sit on a pyre on Holika’s lap. Holika had been given a special blessing’ she could not be harmed by fire and the king wanted to use this blessing as a weapon against Prahlad. However, the king wasn’t aware that Holika’s blessing would only work if she entered the pyre alone. So while Prahlad obediently sat on Holika’s lap, the flames grew and devoured her. Prahlad’s extreme devotion, on the other hand, saved him from the raging fire. From that day, the burning of Holika is celebrated as Holi. In fact, in some parts of India the festival is called Holika instead of its popular half, Holi.
So, on the eve of Holi, Hindus all over the country take part in ‘Holika Dahen’. They light up a pyre and celebrate the death of Holika while remembering Prahlad’s devotion to Vishnu. Some even hurl abuses at the fire as though they were cursing Holika herself. Interesting? What’s even more interesting is that across the nation one can find different versions of the same tale. Some believe Holika had been blessed with a shawl that would protect her from the fire. However, when she entered the pyre with her nephew, he started praying. Of course, his prayers were answered and the shawl fell on Prahlad and saved him instead. Some would even have us believe that Holika was a good person who decided to save her nephew and burnt herself to death.
While the tale of Holika changes in different parts of the country what remains the same is the reason for celebration. The various versions of the legend revel in the triumph of good over evil and the victory of true devotion. Holika Dahenunites people, leading to celebrations that bring out the true colors of India.