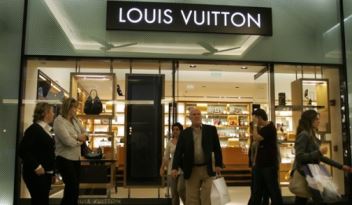 Coca-cola. Ferrari. IBM. Nike. Microsoft. These are multi-billion dollar words. The images that go with these words – those that spring up in your mind immediately, unbidden – are worth even more. They’ve not accidentally become household names. They’ve each started life small, like all of us, and they’ve each clawed their way into our minds over years, a little bit at a time. In the world of business, they are called brands.

Today we bring you a list of the ten most popular luxury brands of 2013.

When Louis Vuitton noticed that all existing trunks in 1858 had rounded tops which made them incredibly difficult to stack on top of one another, he introduced a more ‘stack-friendly’ model with flat tops and bottoms. He made them airtight and lighter to boot. They flew off the shelves with such rapidity that Mr. Vuitton guessed he had something big on his hands. (He did.)

This leather and lifestyle accessories maker started life as a harness workshop in 1837 in France. After the death of Theirry Hermes – the original – his son Charles-Emile moved the shop in 1880 to rue du Faubourg Saint-Honore (where it remains today) and added saddles to their range of products. It was not until 1922 that the company began making bags. It is said that the wife of Emile-Maurice – Charles’s son – complained to her husband of not finding a suitable bag in the whole country, to which the loving husband responded by designing one for her himself.

During his time as an immigrant working in exclusive London and Paris hotels, young Guccio Gucci saw the luxurious bags and purses that guests brought with them. On his return to his birthplace of Florence, he established a shop that sold fine leather goods. The year was 1920. From then till now, barring a tumultuous time in the 1980s when Gucci’s sons and grandsons fought over the property, Gucci’s star has risen and risen and risen. When we last checked, it was still rising.

In 1913, Mario and Martino Prada began a leathergoods shop called Fratelli Prada (Prada Brothers) in Milan, Italy. The story goes that Mario, believing that women had no role to play in business, prevented women-folk of his family from taking any interest in his company. But his son showed no interest in leather, and it was Luisa Prada, his daughter, who took the reins after Mario’s death and ran the company for twenty years. Miuccia Prada, Luisa’s daughter, took over operations in 1978. She’s still running it. We think Mario may be rolling over in his grave, but he can’t be complaining; his daughter and grand-daughter have not done too shabby a job.

Before it became Rolex, this watch-making giant went by the name Wilsdorf and Davis. Hans Wilsdorf and Alfred Davis were then in the business of importing Swiss movements to England and placing them in quality watch cases. In 1908, however, Wilsdorf took the company to Switzerland and called it ‘Rolex’. One story says that the origin of the name lay in the French phrase <i>horlogerie exquise</i>, which means ‘exquisite clockwork’.

Gabrielle Chanel, the mistress of a socialite and textile businessman in Paris, opened a shop for hats in 1909 to make ends meet. She did a lot more than that as the high-society ladies of Paris flocked to her stores for her dainty yet stylish headwear. Soon, on the insistence of one of her lovers, Gabrielle opened two couture stores and launched a line for sporting women which contained, for the first time, straight lines and practical designs that has come to become a hallmark of the brand. When traditional European fashion with its heavy-handed work became impracticable because of World War I, Chanel jumped in and filled the market space with flannel blazers, straight-line skirts and sailor blouses, designed for the new low-maintenance woman.

“The jeweller of kings, the king of jewellers,” as King Edward VII of England once put it. For his coronation in 1902, Edward VII ordered twenty-seven tiaras and issued a royal warrant to Cartier. Similar warrants have since come from the courts of Spain, Portugal, Romania, Egypt and Albania. Cartier is truly, by the looks of it, the jeweller of kings. It has come a long way from its humble beginnings as a private workshop that Louis-Francois Cartier inherited from his master in 1847 Paris.

What do Roald Amundsen, the first man to reach the South Pole, Ernest Shackleton, who lead a 1914 expedition across Antarctica, and George Mallory, who failed in his attempt to scale the Everest in 1924, have in common? They were all wearing outfits designed by Burberry when on their missions. When in 1914 the British War Office wanted to adapt its officer’s coat to suit the conditions of modern warfare, whom did they call? They called Burberry, and the ‘trench-coat’ was born. What did pilots A.E.Clouston and Betty Kirby-Green, who made the fastest flying time between Capetown and London in 1937, wear on their flight? Uniforms made by Burberry. Do you still think we’re exaggerating when we say Burberry is part of English history?

Launched humbly in 1925 by Edoardo and Adele Fendi as a fur and leather shop in Via Del Plebiscito, Rome, today Fendi is a multinational luxury goods brand which specializes in fragrances, eyewear, timepieces and writing instruments. If you have a (very rich) friend who sports a ‘baguette’ handbag, and if you’d like to impress her, pipe up before she has a chance to tell you and ask her innocently if her bag is from Fendi. It will make her beam with pleasure, we promise.

In 1946, Miles and Lillian Cahn joined Gail Leather Products, a tiny leather wallet making company fashioned out of a loft in Minnesota. By 1950 the Cahns were running the enterprise. When Miles, inspired by the behaviour of sweat-sodden baseball gloves, devised a new method of processing leather that made it stronger, softer, more flexible, and deeper-toned in colour, Gail Leather Products turned a new leaf with its wallets and handbags. In 1961, the Cahns bought the company and named it Coach.