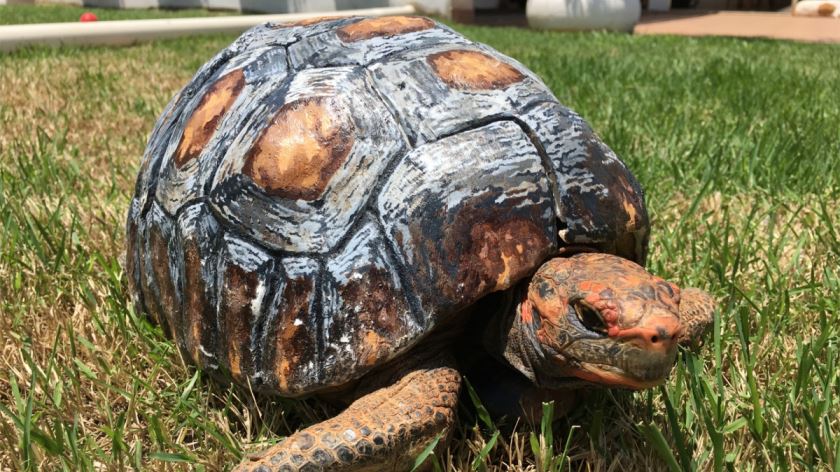 In Brazil, a gravely injured female tortoise was found after a forest fire burned her shell almost completely and was left with burn marks all over her body. Even though her chances of survival were slim, a team of specialists from Sao Paulo called ‘Animal Avengers’ came forward and took up the challenge of helping the tortoise. Dr. Rodrigo Rabello who discovered the tortoise in the forest, named her Fred after the famous character Freddy Kruger from the ‘A Nightmare on Elm Street’ film series.

After surviving the fire, Fred fought against two bouts of pneumonia as well. She was in a deep state of shock because of which she couldn’t eat anything for 45 days. But somehow Fred overcame all the difficulties and survived. Not just that, she even got her shell back using a 3D printer! The team at the Animals Avengers has a designated designer who designs such prosthetics for animals/birds in need, using the 3D printing technology. An ecstatic Dr. Rabello revealed that Fred is the first tortoise in the world with a 3D shell prosthetic.

A lot of pictures of Fred were clicked initially to design the frame of the shell, which were then compared with the pictures of other tortoises to get a better idea. The shell was first reconstructed in the digital format and once everything looked perfect, they used a 3D printer to craft the shell, using corn-based plastic. The design was made in the form of four different pieces, which were later joined together like a jigsaw puzzle. Each piece took approximately 50 hours to complete, but the end-result was perfect.

Once the team joined the pieces together, the shell was ready to be placed on Fred’s back. Only one thing was left – to paint the shell like an original one to make it look more authentic. But this task wasn’t as easy as it sounds. They first needed to find a suitable paint, which could last for several years without fading away. It was also important to ensure that the paint would not affect Fred’s health adversely in any way.

After finding the paint, Brazilian artist, Yuri Caldera was contacted to complete the job, who readily agreed to paint the brand new shell for Fred and voila! – Fred now looks as if nothing ever happened. Truly a milestone in the history of veterinary medicine!