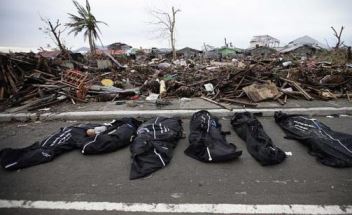 Manila, Philippines – official reports say that the death figures from the Typhoon Haiyan that hit the mid-Philippines on November 8, has reached to 6,000 people and still more than 1,800 people are missing. Talking more accurately with figures and death toll, Philippines’ official disaster response agency has stated on last Friday that 6,009 people are confirmed dead while 1,779 are still missing. This typhoon that has stuck Philippines last month is the deadliest natural disaster that hit Philippines.
Spokesman for the National Disaster Risk Reduction agency has stated officially that at least 20 bodies are being found on daily basis under the remains of the central hit point of the typhoon, Tacloban. It’s also stated by officials that houses of nearly 16 million people are either completely demolished by the disaster or damaged badly. This makes it more difficult for the national disaster control agencies to provide for homeless families and still keep searching for bodies of dead people. The situation is much worse that imagination which can be estimated by the statement which says it will take more than 3 years to rebuild the homes that has been hit by the typhoon.
Because of the delay and natural conditions in Philippines, it’s not a simple and easy task to identify the remains of dead people, stated by officials. Dividing the manpower to searching for dead bodies and taking care of homeless families has made it even harder to start the identification process on advance level and this is the reason why the missing person’s figure is still the same.