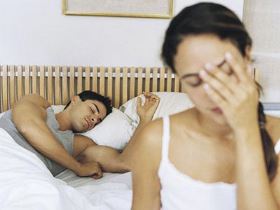 There’s more to it than meets the eye

Have you ever wondered why your husband or boyfriend falls asleep as soon as he achieves orgasm? Well, if you are not, a lot of women from all around the world are wondering. More than wondering, they are getting all agitated and frustrated that the person they refer to as their ‘life partner’ or ‘soul mate’ is such a selfish pig.
Well, ladies, relax! He is not as self-centered as you think.
Men tend to fall asleep after orgasm due to their body chemistry and not because they are mean and insensitive. When a guy reaches climax, a cocktail of hormones is released by his brain that makes him fall asleep. The main culprits are the two hormones called oxytocin and prolactin.
Oxytocin is the hormone responsible for pleasure and relaxation while prolactin triggers sleep. In recent studies it has been shown how some animals injected with prolactin immediately start to feel drowsy. So in a way you can say that men immediately fall asleep after sex because their brain is ordering them to do so.
So while a woman’s brain would want to talk, cuddle, kiss his forehead, express how much she loves him, indulge in a bath together or simply stare him in the eyes, the guy’s brain would be telling him, just shut your eyes, turn to the other side and sleep. No matter how rude it may sound, this is how a male body chemistry works.
And it’s not just the chemicals. The blood rush in his body too makes him fall asleep straight away after reaching orgasm. The blood rush depletes the energy-producing substance called glycogen from your guy’s muscles after climax, and since men have more muscle mass than women, they feel extremely exhausted after having sex.
So is there a solution?
Yes, there are a few things you can try in order to keep the Romeo from dozing off after an intimate session. Try having sex at a location other than your bedroom. For example, you can make love in your bathroom. Light some candles and use the aroma oils and play some nice music. Indulge in love making when you know he is starving for food. He won’t fall sleep after the act since more than sleep, his body will need food to re-energise itself. Don’t be too hard on him. Talk to him about how you feel and deal with it patiently. And now, you know.