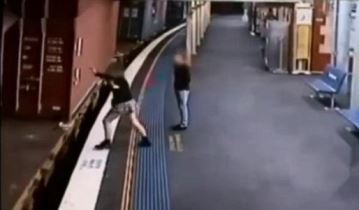 A young girl in Australia cheated death after she jumped on an empty deck of a moving cargo train in front of her friend who just watched with his hands in his pockets. The stunt went wrong when she failed to land properly and fell on the tracks through the gap between two carriages. The whole incident was captured on CCTV and police have deemed the incident as an act of stupidity.
One the freight train passed by, the girl’s friend saw her lying motionless on the tracks but after a minute or two, she woke up and was helped onto the platform by her friend and another person. In the meantime, paramedics and cops arrived who took her to the nearest hospital where she received treatments for bruises and was discharged the next day.
The incident occurred at the Springwood Station based in Blue Mountains of New South Wales when the girl was waiting for the last train with her friend.