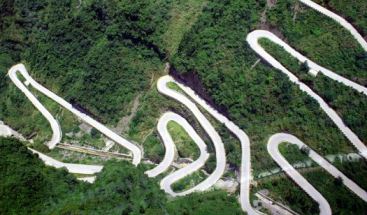 Some people just want to break out of their cocoon life in a metropolitan city and head over to the far terrains in order to find inner peace. But there are some road-trippers who just love to cheat death and drive off on a voyage to places that will certain give an adrenaline rush to anyone who craves for adventure. Highlighted below are some of the deadliest roads over the planet for brave road-trippers. If you consider yourself to be one of them, then add these places to your list.
Dalton Highway, Alaska
Dalton Highway in Alaska is known to be one of the most harrowing roads ever built. The popularity of this highway grew to such extent that a reality TV show was made on it. A total of four out of six seasons of History Channel’s Ice Road Truckers is based on Dalton Highway. This road was built way back in the 1970s and served as a passage through which, supplies from Trans-Alaska pipeline were brought. The route expands 666 kilometres and the road throws deadliest challenges to the drivers in the form of freezing temperatures, avalanches, gravel roads, snowstorms, etc. Furthermore, there is absolutely no signal reception or any service stations as such. For someone who wants to tread on this path, it is strongly recommended to keep spare tires.
Saddle Road, Hawaii
Route 200 of Hawaii was once considered as one of the most dangerous roads. The lanes of the road are quite narrow and the surface is rough as well. Furthermore, at certain hours of the day, a dense vision-obscuring fog settles on the road increasing the possibility of mishaps. Furthermore, Route 200 also known as Saddle Road has many bridges on it that have only one lane. There used to be a time when car rental companies strictly forbade their customers to avoid Route 200 because of the dangers it possesses. Over the past decade, there have been various contractors who have taken up projects to extend the width of the road and most of the rough portions of the road have been repaved. But the single-lane bridges are still there and low visibility is something that cannot be avoided in any way.
Colorado State Highway 82, Colorado
For all those who possess a fear of heights, the road that extends from Aspen is definitely something that they should stay away from. This highway is based 3,688 metres above the sea level in the Rocky mountain range. The road consists of tight curves, steep drop-offs as well as narrow stretches that can only accommodate one car at a time. This is one of the reasons why the highway is always sealed by the Colorado Department of Transportation during winters as driving on this terrain is close to impossible during that point of time. Let us say you successfully make it through the mountain roads, you will not be able to go past Canon City. The Royal Gorge Bridge basically looks out to picturesque scenery which attracts road-trippers.
Guoliang Tunnel Road, China
For several years, the villagers of Guoliang were under duress as they did not have a highway

that connected their village to the towns that fell in the vicinity. Thus, eventually after several unattended requests, the village decided to send 13 of its strongest men to construct a roadway that can connect every town in the vicinity. This road is quite dangerous as it only has a width of 4 metres. The road has a steep drop and there are various portions of the road which are not exactly even since they have been carved out by hand. The roads basically twist at different angles making them even more dangerous to manoeuvre. There is a 400-metre tunnel that constitutes a small part of the whole road. In this tunnel, the villagers fitted 30 windows of different sizes that give a breath-taking view of the whole landscape outside.
Tianmen Shan Big Gate Road
The Tianmen Shan Big Gate Road in China has a total of 99 curves which basically pays tribute to the nine palaces of heaven. Even if someone covers all the 99 curves, they will still have to climb 999 steps in order to reach the summit of the mountain. On top of 999 stairs, there is a natural rocky arch which is commonly referred to as Heaven’s Gate. According to myth, the Heaven’s Gate is considered by local people as the link between mortal world and almighty. But one does not need to climb those 999 steps in order to reach the peak as cable car service will directly take them to the top.
Trollstigen, Norway
This hilly road in Norway is known for its 11 deadly turns that are dangerously steep having a gradient value of 9%. But even if it is a single-lane road, yet it is one of the most popular tourist attractions in Norway. Every year, thousands of road-trippers come on a voyage to Trollstigen but during winters, the roads are sealed since it becomes too dangerous to even walk on them.
Thus, these are some of the most dangerous roads but might be the best for all those who consider themselves to be brave road-trippers.