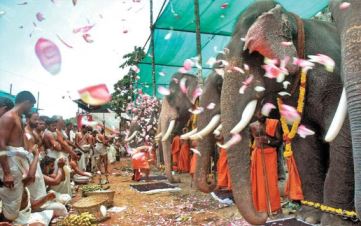 Last week I visited the village of my wife’s parents in Southern Karnataka called Kannar. My wife’s maternal uncles live there in their ancestral home held up by decades old teak beams and mud tiles. They till their land, milk their cows, feed their oxen. They sprinkle water over their courtyard in the evenings. They lay down on their rope cots at night and look at the stars.
Their day begins with the worship of the basil plant set up in front of the main door. I asked my wife’s uncle why they do it, and he said it was the incarnation of the Goddess Lakshmi, the bringer of wealth and prosperity. He also said that long back, when the Gods and Demons churned the ocean of milk for the divine nectar, a basil plant grew out of the earth where Dhanvantari, the mendicant, shed tears of joy.
Worship of cows is a daily ritual too. ‘Cows give us milk,’ he said. ‘Just like our mothers.’ He placed some vermillion on the animal’s forehead, and his wife circled a camphor-lit lamp three times around it, quietly mouthing a prayer. I joined my hands and bent my head. When we were making our way back to the house, he said to me, “Lord Krishna loved and respected cows. He said they were mothers to all human beings.”
At breakfast they told me how snakes regularly appeared at their front door with their hoods raised. As I nervously looked away in the direction of the courtyard, they said that they never harm them, that they visit only to see if everything was all right. And if they fall on the knees and touch their noses to the earth in front of the snake, it would go away, always. I asked them if it had never occurred to them that they ought to kill the snakes that ‘visit’ them. They shook their heads. One of them appeared shocked by the suggestion. The other just smiled.
Snakes are a central part of our mythology, I found. Lord Vishnu sleeps on Adisesha, the foremost of all serpents, who is also one of the primal beings of creation. Vasuki, the great king of the Nagas and the bearer of the famed Nagamani, took on the role of the churning rope when the milky ocean was churned for its contents. Lord Shiva wears a snake around his neck. In various parts of India, the festival of ‘Nag panchami’ is celebrate to honour the place of snakes in our cultural ethos. Idols of snakes are abundantly found under trees in many villages.
Around lunchtime, it rained. We saw four peacocks run across the courtyard through the paddy fields on the right. They told me that they were going to the river that lay beyond. ‘You know,’ said my father-in-law, ‘when the peacock opens its plumage fully, it resembles the shape of the Omkara.’ I looked after the scurrying birds. None of them had opened their feathers. As they reached the edge of the fields, before they disappeared into the trees, one of them turned and looked at me. ‘Plus,’ said my father-in-law, ‘they keep the snakes away.’
A few feet away from us a pigeon swooped down on a squirrel and clawed it to death. As he pecked at the yellow-striped brown coat and tore open the flesh, my wife’s uncle said, “See how beautiful is nature. We must do our best not to intervene with it. We must take what we need, and give back what we don’t.’ The pigeon flew away with a dangling half-carcass wedged in its beak, and somewhere not too far away her chicks are squawking in their nest for the meat. Nature, that’s all it was. Yes.
The integrity of all life forms is at the center of Hinduism’s faith. We worship animals that give us life. We worship the earth that gives us grain. We worship dangerous animals so that they may not harm us. We worship creation itself, for being so wonderful, so connected, so detached. We give nature a feminine form and call her Bhagawati, the all-powerful mother who sired us all and who will, eventually, destroy us all.
I asked my father-in-law if that was indeed true, if our acts of animal worship were nothing more than bowing our head in reverence at the feet of Mother Nature. He began to say something, but something stopped him, and he looked away in the direction of the paddy fields, where the peacocks had disappeared. He did not answer my question.