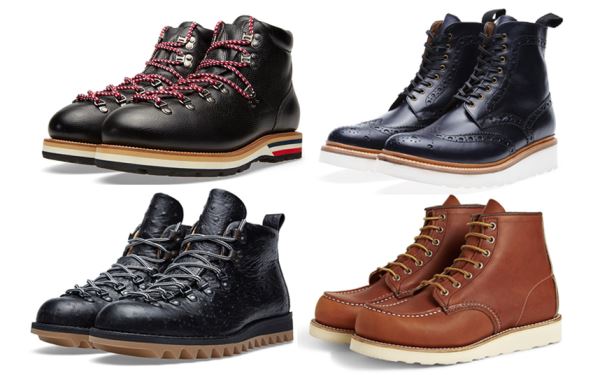 There are shoes and then there are boots. Every man with an eye on style and poise will need a pair of boots in his wardrobe. If you’re struggling with the many choices on the market, here is a list of the best boots of 2015, which will add a dash of pizzazz to your fashion.

Before movies like Shrek made boots famous by putting them on a puss – albeit a debonair, charming puss brandishing a sword – boots have always been known as the choice of footwear for a ‘real man’. Now we admit that in the modern day and age such archaic notions as ‘real men’ and masculinity ought to take a backseat, but every once in a while, there is nothing wrong in showing off some good, solid boots.

You know what they say. A man in boots knows how to get things done.

Not all boots are created equal, though. We have put together ad list of the best boots in 2015 so that you won’t go astray in picking a pair that fits you.

The chukka is named after a period of play in polo, and rides seamlessly with a wide choice of attire. Whether you want to go casual or formal, you can find a chukka boot that fits your foot and your style. It is traditionally made in suede or calfskin, and it has a short but smooth shaft, which makes it an easy choice to wear with tailored shorts.

This boot is a wardrobe staple for 2015. Wear it with raw denim jeans, a chambray shirt or a black denim jacket for a workwear look. Otherwise, wear white chinos and a polo shirt to give out a conventionally preppy look.

If you’re time-poor and stylish, the Chelsea boot will work for you. The Beatles and Lodon’s pop and rock culture should be thanked for establishing the Chelsea boot as a component of men’s fashion. Its sleek, laceless design offers a functional beauty to the Chelsea that other models cannot match. It has elastic side panels for easy slipping off and on, and the panels generally come in contrasting colours against the leather, which make for an instant style statement.

Match your polished leather Chelsea boot with a wool suit, shirt and tie, and you will be both office and wedding ready. If you wish to wear your boots on colours other than black, then you will do well to wear a pair of brown boots.

The hiker boot is crafted with a mid-rise shaft and leather outer sole with a grippy heel for traction. Other hiker boot styles a have a flat sole, made from crepe, leather or rubber, and often come in a contrast sole colour such as white or black. This type of boot also features coloured laces. It’s the most casual of all boots, and should be kept far, far way from a suit.

The hiker boot has a casual vibe, so loose jogger pants and a satin bomber jacket will accentuate this feel. These boots also work well under wax-coated jackets and duffel coats, which will give you a smart appearance. It is made from leather, and the synthetic panels and practical eyelets and laces make for a sporting edge.