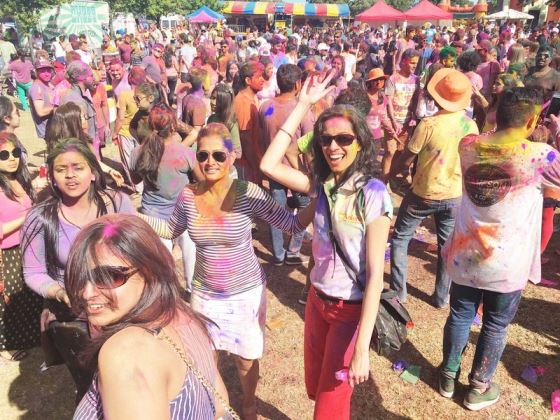 The Indian people of Australia are no strangers to AIII and their various activities to promote Indian presence in Australia. From as far back as 2002, they’ve been organising events around Indian festivals. We went to their Holi Fair this year and came away being mighty impressed. The piece has the full summary.

The Australian Indian Innovations Incorporated (AIII) at first mention sounds like a corporate entity, but in their own words, it’s a ‘democratic, secular, vibrant and non-political organisation’ based out of Melbourne, driven by a purpose to nurture the Indian presence in Australia. One of their trademark activities is to celebrate the prominent festivals of India – Diwali and Holi among them – with great fun and frolic across Australia.

So on the occasion of Holi, the festival of colours, it was no surprise that AIII threw a grand party to over 7000 patrons at its eighth successive Holi Fair at Sandown Racecourse. Seriously, no one organises these mela events better than AIII. There are three things that make a mela around a festival a success: food, entertainment and tradition.

The food aspect of the eighth Holi Fair was exemplary. From street food to exotic, from the North of India to the South of India, just about every cuisine you could imagine had a stall at the Racecourse, and the smells that invaded your senses when you took a walk around the place, promising to yourself that you were just going to have a look… well, let’s just say that we had our plates full of delicacies in no time.

This year’s entertainment was taken care of by DJ Baba and DJ Vijay, who delivered a great mix of Bollywood and Punjabi music and kept the throngs of people entertained for a full four hours. It was impossible to be there and keep your feet from tapping away to the music. It was like our feet had minds of their own.

And last but not the least, it’s important to realise at these events that the reason for congregating together is to celebrate the festival with due deference to tradition and culture. The burning of the effigy of Holika was carried out with all the rituals intact, and all the people present were invited to participate. To cap off a cherry on the cake, the mela was environmentally friendly as well, with only powdered colours being allowed.

People of the AIII are already looking forward to Holi 2017, which they promise will be no different in the core functional aspects but will definitely be bigger and grander than this year’s version.

If the vision does come true, our mouths are already watering. Great job, AIII!