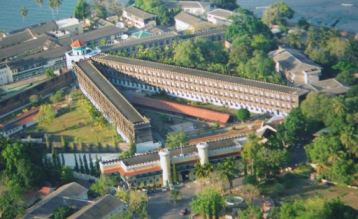 Andaman and Nicobar are a clutch of islands situated at the juncture of the Bay of Bengal and Andaman Sea. Though they are closer to Thailand and Burma, they are an Indian Union territory. Like all well-known island groups (The Pacific Islands, Muritius etc), Andaman and Nicobar are popular tourist spots. Whether you want some quiet time on the beach away from the hustle and bustle of everyday life, want to get closer to nature on hikes and natural parks, or dive into coral reefs and take in the majesty of thriving underwater life, Andaman and Nicobar will not disappoint.
Here are four places you cannot miss when you visit the islands:
Cellular Jail
This is what put Andaman and Nicobar on the map, and this is perhaps the reason why Subhash Chandra Bose, one of India’s pre-eminent freedom fighters, called the islands ‘Shaheed’ and ‘Swaraj’. During the first war of Indian Independence in 1857, the British Empire used the islands as prison for political activists.
Built in the ten-year period between 1896 and 1906, the building contains seven wings and 693 cells, each one designed to be solitary so that the prisoners had no means of communicating with one another.
Only by studying the past, they say, we see into our futures. Do not miss the opportunity to look back and become part of India’s bloody past, to sneak beneath the skin of all those men who were imprisoned as part of the freedom struggle.
Radhanagar Beach
Situated on Havelock Island, this is often called the best white-sand beach in India, which is quite a compliment given that it competes with the famous beaches of Goa for the title. Make sure that you’re present at sunrise to catch the play of sea-green over white, and also at sunset to take some great silhouettes. Explore every inch and make sure you have shots of the rocks, of the trees, of the shade, of the hermit crabs, and their sand sculptures. And afterward, take a long, barefooted walk with a loved one while the waves gurgle and splash against your feet. There is no better feeling than that of silvery sand running away from underneath your toes.
Mahatma Gandhi Marine National Park
If you’re a marine enthusiast and if coral reefs and snorkelling is right up your alley, you should look no further than the Mahatma Gandhi Marine National Park. It is situated on an island off Port Blair which has been converted into a marine sanctuary to conserve the flora and fauna. Allocate half a day for this, leave right after lunch on the boat from Wandoor, and take in the pleasures of snorkelling in one of the best-maintained reefs in the world. The water is crystal clear and the experience is surreal.
Ross Island
Ross Island was once the administrative capital of the islands, but now nature has taken over, and it is not uncommon to see strong, sturdy buildings intertwined with banyan branches and roots. This will transport you to scenes of long-dead towns whose stone buildings get covered by moss and creepers over decades and centuries. If you’re a nature lover, you can spend the whole day here, walking around and contemplating the quiet, majestic force we all live under, and sometimes, take for granted.
What to eat
Like all tourist destinations, Andaman and Nicobar islands have restaurants almost everywhere you look, and the variety of cuisine is vast. Having said that, there is a non-vegetarian slant to most of the eateries you find here, with fish being the staple ingredient in most dishes. Depending on where you’re going, you will find good Chinese, Mexican and Continental food also. All beaches have eating joints lined up along the shore, and all marine and water sport parks have restaurants situated nearby. So whether you’re the kind who orders the most outlandish dishes of a menu or someone who sticks to daal rice, the hotels in Andaman will look after you well.
When to visit
Mid-January to mid-May usually sees the best weather, visibility and driving conditions. Since one of your primary aims to visit the islands is to enjoy the great outdoors, the flat seas, the sunny clear air, and the pleasant weather will make for an unforgettable trip. If you want to beat the holiday traffic and have a quiet holiday, get there before January ends, and if you’re planning a May vacation, keep in mind that summer really hits home at that time of the year.
Alternatively, August through to November also sees largely good weather, but there is the likelihood of rough seas and occasional showers, so there is the chance that you just might run into one.
How to get there and around
For now the only way to get to Port Blair, the capital of Andaman and Nicobar, is by air from the Indian mainland. Within the archipelago, there are a variety of boats to take you to whichever island you want to go.