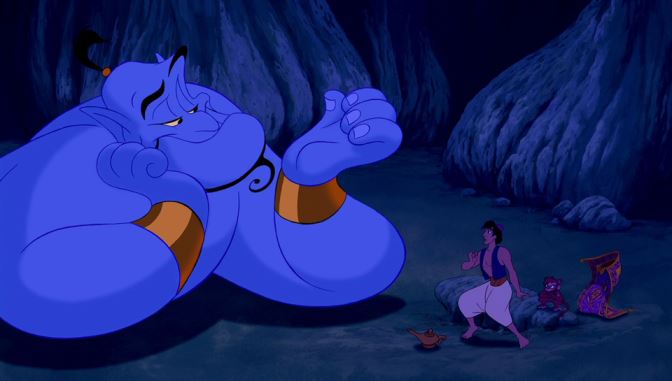 Fans of Alladin, the classic Disney animated movie, will rejoice to know that a new movie is going to be made in the franchise featuring the blue genie. But the question is who will lend his voice to the new character, now that Robin Williams, who acted in the original, is no longer with us.

Aladdin is one of those iconic animated movies that we all grew up with, and more iconic than most characters is that of the blue wise-cracking genie. The voice and performance of Robin Williams, who lent his voice to the genie’s character, went a long way toward making the movie a modern classic.

Now, Disney is looking to re-launch the franchise with a movie called ‘Genie’, in which the blue wish-giver gets his own titular role in an attempt to introduce him to a whole new generation of kids. This falls in line with Disney’s general strategy of releasing old classics with new animation technology. For example, Jungle Book is returning to the movies in May 2016, in full 3D glory.

If reports are to be believed, Disney also has enough material to make the movie, because there are apparently enough recordings of Robin Williams’s voice from when he was alive to fill a complete movie. However, the late actor said in his will that Disney is not allowed to use his voice for at least 25 years after his death. The reason is that any more sequels or prequels will generate financial penalties for the family since posthumous earnings are subject to any number of legal technicalities.

The relationship between Disney and the late actor could also only be described as frosty at best.

When he worked on the first Aladdin movie, Robin Williams did so under the condition that his voice would not be used to shill any sort of merchandising or tie-in products, to which Disney agreed. But they broke the clause in their contract and used the actor’s voice for many tie-ins, which left Williams seething. But the studio and the actor seemed to have patched up, and Williams lent his voice to the direct-to-video sequel, Aladdin and the King of Thieves.

So as the situation stands now, Disney is left with no other choice but to use another voice actor for their future movies featuring the Aladdin genie. Even if restrictions on the deleted material from the original film was non-existent, and even if the will of the dead actor had not placed any impositions on Disney, crafting a new Aladdin movie out of Williams’s legacy wouldn’t be forgiven by fans of animated movies and of viewers who have come to be used to Williams’s comedic style.

However, in the distant future, once the 25-year period has come and gone, one can expect some ambitious executive at Disney (who had perhaps seen the first Aladdin movie as a child) to make a new movie with all of Williams’s deleted voice recordings intact. But until then, it seems like the world’s favourite genie will have to make do with a new voice.