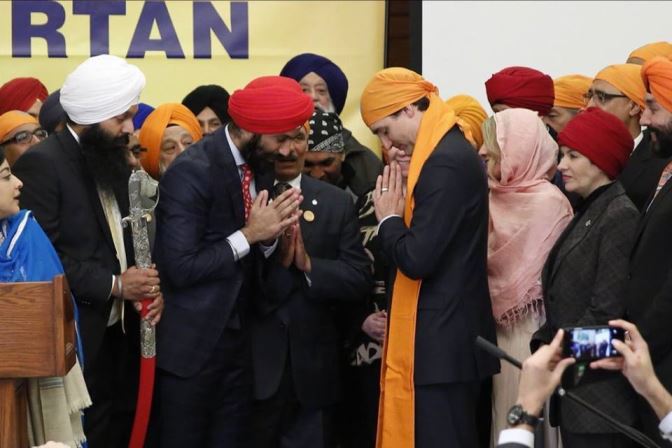 Justin Trudeau, the current Prime Minister of Canada is known for his liberal political ideologies and for his witty sense of humour as well. He has a huge fan-following in Canada, especially among the Sikh community. He was in US a couple of months back, addressing the students of the AmericanUniversity of WashingtonDC when he made this casual statement that his cabinet has more Sikhs than Narendra Modi’s.

It sounds surprising but it’s actually true! While Prime Minister Modi has two Sikhs in his cabinet, Trudeau has four – Harjit Sajjan (Defence Minister), Amarjeet Sohi (Minister of Infrastructure), Navdeep Singh Bains (Minister of Economic Development, Innovation and Science) and Bardish Chagger (Minister of Small Business and Tourism). Besides his political alliance with the Sikh community, Trudeau has been spotted on several occasions shaking a leg with the Punjabis, showing-off his cool ‘bhangra moves’ and relishing hot ‘parshada’ on his visits to local Gurudwaras.

If this wasn’t enough, the newly appointed PM recently gave a moving speech, apologizing to the Sikh community on behalf of his country’s behaviour towards them 100 years ago. In 1914, government of Canada turned away more than 370 Punjabi immigrants from India who boarded the ship Komagata Maru to the port of Vancouver. The immigrants waited for 2 months on the ship, hoping that the government will eventually allow them to enter Canada but that never happened. Instead, they were attacked by military ships and were forced back to Calcutta. Upon reaching Calcutta, British soldiers assailed them, killing 19 people. Several others were imprisoned.

On 13th April, while celebrating a Baisakhi event in Ottawa, Trudeau said that the immigrants on Komagata, like millions of other immigrants to Canada, were hoping to start a better life in Canada with their families. They had so much to chip in for their new home but Canada failed them completely. He further added that as a nation, Canada should never disregard the prejudice those immigrants suffered by the actions of the then government. He went on to promise that on 18th May he will stand in the House of Commons to present a comprehensive apology to the victims of the Komagata Maru incident.