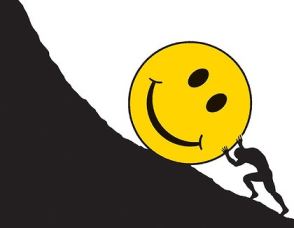 Our experiences shape the thoughts we harbor.
Ours is an existence tempered with shades of varying emotions and perspectives. Each day, we go through life-gaining experiences, learning new things, overcoming obstacles, making new friends and at times, parting from old ones. We witness a plethora of events, each of which, in its own little way, shapes the way we think and act.
Moreover, the human brain is designed to perceive, assess and evaluate different sensations in different ways. What is even more unique is that everyone’s brain functions differently; the very trait which distinguishes the optimists from the pessimists, the dreamers from the realists, the liberals from the conservatives and so on. While everybody has their individual set of problems, one general collective problem that has always been our undoing is the practice of conjuring negative thoughts and allowing them to gain the upper hand over us.
What Is Negative Thinking?
Negative thinking, usually characterized by recurring instances of anxiety and fear (which sometimes might seem to appear without a cause), is a very real threat to our moral, emotional, mental and also physical constitution.
Constant rumination over negative thoughts is a problem that plagues many amongst us. There is that one problem that we can never stop worrying about or there is that one outcome that we always fear.
Why do people get addicted to Negative Thinking?
If we are to get rid of these unwelcome thoughts, we have to nip them in the bud. Their source has to be traced and then tackled.
What is frightening is that the human brain is so flexible in its reception and analysis of external stimuli, that not only does each of us react differently to different situations; we also feel the same emotion in our individual ways.
Negative thinking can be broadly attributed to some crisis that the person is currently going through, or some event that occurred earlier and which has earthed itself in the person’s mind quite vividly, leaving behind a seemingly indelible impression, long after it has seized to be important.
In some cases, negative thoughts can be a result of mild or acute forms of paranoia, which, if left unchecked, can fester and corrupt the mind, in more ways than one.
“Also, certain medications, like those administered in case of Hepatitis C or those used to treat high blood pressure, have been known to induce negative thoughts and mild symptoms of depression in people.”
Negative thinking concludes into depression.
What is especially notable about this inclination towards negative thinking is that more often than not, it becomes a practice, an obsession with the person, sometimes even a compulsion. Such cases lead to the manifestation of clinical disorders like chronic depression and such.
It is a vicious cycle that quickly captures the person, what with one negative thought leading to another and very soon, it comes to resemble a cancerous growth that proliferates and sustains itself, by feeding on the person’s insecurities, fears and anxieties.
Negative thoughts persist, if not ADDRESSED!
It is rather difficult to break the chain of reasoning that leads a person to obsess over the problems, instead of looking around for solutions.
It takes great will-power to look at the brighter side than to give in to the dark depression that persistently nags at a considerable portion of one’s disposition. This is the main reason why people find it easier to mull over unpleasant situations and give in to negative thinking.
Negativity is HARMFUL!
These negative thoughts, if allowed to accumulate could cause serious damage within an individual.
Most problems related to drug abuse and substance abuse, have been traced to the person’s pessimistic take on his/her life.
These tendencies include generalizing one unpleasant incident to every other event that happens subsequently, selectively internalizing only the negative aspect of a situation while ignoring the positive side, and adopting a dichotomous reasoning- viewing things as either good or bad, without acceding that there might be mixed aspects of a particular situation.
These kinds of behavioral patterns might lead to physiological anomalies like insomnia (lack of sleep), absence of hunger, headaches, nausea, high blood pressure and so on.
When a person is sure of the absence of positive happenings in his/her life, s/he might also develop suicidal tendencies. Alcoholism is an example whereby people resort to continuous intake of alcoholic beverages in order to escape the feeling of anxiety and hopelessness that has engulfed them.
Therefore, negative thinking has a debilitating effect on the physiology of an individual, if it is left unaddressed and untended.
You CAN control your negative thoughts!
Over time, owing largely to discovery of newer methods in the field of psychotherapy and psychoanalysis, ways to tackle this inclination towards negative thinking have been discovered and effectively utilised, that too.
Counselling is one such option. It would never be amiss to take therapy from a psychiatrist of repute in order to address the issues that are troubling you. Going to a “shrink” is not something to be ashamed of. It shows that you recognise your problem and are willing to overcome it.
Also, it is always helpful to embrace rejuvenating exercises like meditation or yoga, which have been proven to be highly beneficial for the mind and body.
Furthermore, try to be as active as possible; do not let your mind be idle.
Try to be around people who have a positive effect on you; more often than not a person’s company determines his general mood.
Let your worries go, accept responsibility.
Even if you do end up having negative thoughts about something, try hard not to let it engrave itself in your subconscious, where it has greater chances of growing and multiplying. Let it be a passing worry. Finally, tell yourself each day that your life is your responsibility and that you will accomplish it well. Stay happy, stay healthy.