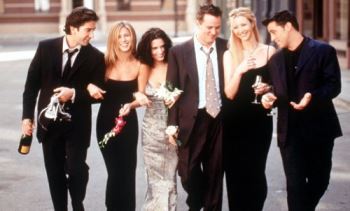 From 1994 to 2004, the TV show, Friends, which was ‘about sex, love, relationships, careers, a time in your life when everything’s possible’, enthralled audiences around the world. Today in 2013, the characters still live on Youtube and in DVD collections at homes the world over. But what of the people that played our favourite timeless characters? We decided to find out.
Jennifer Aniston
She played the spunky, sexy Rachel with an eye for fashion. Of all the six stars of Friends, Aniston is perhaps the only one who had a Hollywood career of note, starring in movies such as Bruce Almighty (2003), Along came Polly (2004) and The Break-up (2006). She was last seen in We’re the Millers (2013), a comedy about a drug dealer with a fake family. On the personal front, she seemed to have exorcised the ghost of Brad Pitt completely from her life, sailing pretty with actor Justin Theroux since 2011.
Courteney Cox
After playing the perfectionist and bossy Monica on Friends, Courteney Cox’s next big role came in Cougar Town, the 2009 series focusing on the humourous side to being a divorced woman in her forties in Florida. In the meantime she missed being Desperate Housewives’ Susan Mayer because of her pregnancy, but otherwise her professional life was restricted to the occasional guest appearance here or there. Her marriage of fourteen years to actor David Arquette ended in May 2013.
Lisa Kudrow
Her first recurring television role was as Ursula Buffay, the eccentric waitress on the show, Mad About You. She would reprise this role on ‘Friends’, where she also played the ditsy but street smart masseuse, Phoebe Buffay. Perhaps the most popular of the three female Friends leads, her life after Friends has been quiet, save for supporting roles in movies (P.S. I Love You) and on TV (Cougar Town). Her long-standing marriage to Michel Stern, whom she married in 1995, is still going strong.
Matt Leblanc
He gave us the dense, food-loving, womanizing Joey in Friends, and later starred for a period of two seasons in the spin-off series named ‘Joey’. Since then his public appearances have become largely sporadic until 2011, when he began acting as a fictionalized version of himself in a show called Episodes, for which he won the Golden Globe for best actor. He will be seen in the character of Charlie Darby in the upcoming Hollywood flick Lovesick. He is divorced with one child.
Matthew Perry
This actor who played the jokey Chandler Bing on the show had the most vibrant post-Friends career on TV. He was part of the main cast in three TV shows between 2006 and 2013: Studio 60 on the Sunset Trip, Mr Sunshine, and Go On. He also made numerous guest appearances on other TV shows, and thanks to popularity as Chandler Bing, had a noteworthy stab at Hollywood too, in movies such as The Whole Nine Yards, in which he starred with Bruce Willis. He’s known to be a recluse in real life with repeated trysts with alcohol and drugs.
David Schwimmer
In Friends, David Schwimmer played Ross Geller, Monica’s palaeontologist older brother, a man of good humour though socially awkward and clumsy. After the end of Friends in 2004, Schwimmer played the role of the titular character in the 2005 independent drama, Duane Hopwood, and earned good reviews from critics for his performance. After that he has largely been involved in theatre – earning for himself a place in the field – and occasional guest roles on TV. He’s also lent his voice to animated features, the most popular being the character of Melman in the Madagascar series.