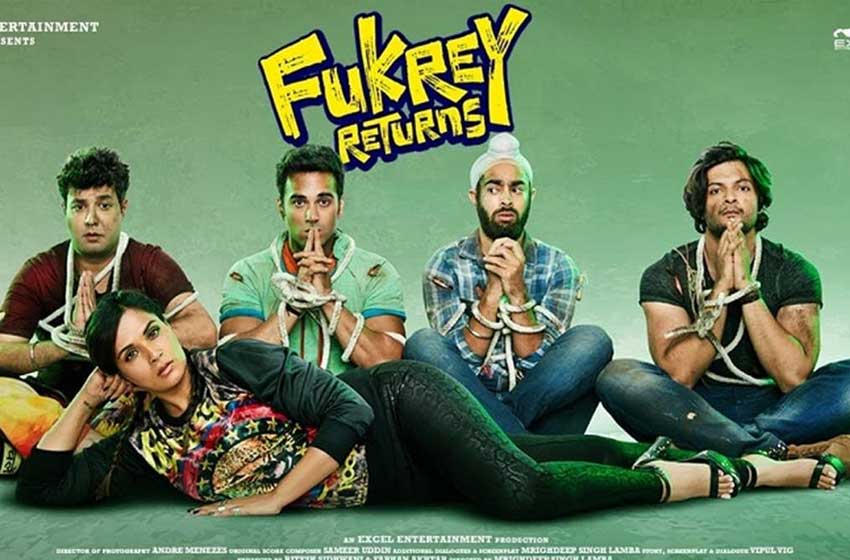 FUKREY RETURNS STORY: Just as Hunny (Pulkit Samrat), Choocha (Varun Sharma), Lali (Manjot Singh) and Zafar (Ali Fazal) are reaping the fruits of their misadventures from one year back; they are pulled up by the dreaded don, Lali. She is back from prison early and wants to continue from where they left off.
FUKREY RETURNS REVIEW: To watch ‘Fukrey Returns’, you don’t necessarily have to watch the first part, because the director clearly explains the entire story in the opening credits. However, it’s a fun film which we recommend you watch. So is this one. In fact it is funnier than the first part. That familiar craziness you’ve seen in the characters is not just back; it has doubled, in fact.
This time, Lali is out of prison and she is broke. She wants a lot more cash from them and once again uses their special skills to fill her coffers and repay the scheming politician Bhatia who secured her early release. As always, their scheme to pay Lali goes awry and they are dragged in deeper as newer villains emerge who also want a piece of the action.
The strongest aspects of the film are the performances. And once again, the scene stealer is Varun Sharma as Choocha, the affable weirdo with superpowers to watch bizarre dreams which win him a lottery. In this one, his powers have evolved, but sadly his mind hasn’t and he still pronounces Goa as Goya and still can’t get over the fact that Lali does not love him. The real surprise is the measured comedic performance by Pankaj Tripathi as Panditji, the scheming college watchman. With his terrific comic timing, he leaves you in splits in a majority of the scenes which he is in. The rest of the cast, too, have essayed their roles perfectly. The second half is plot-heavy and feels a bit stretched out. However, the jokes keep coming which make it bearable.