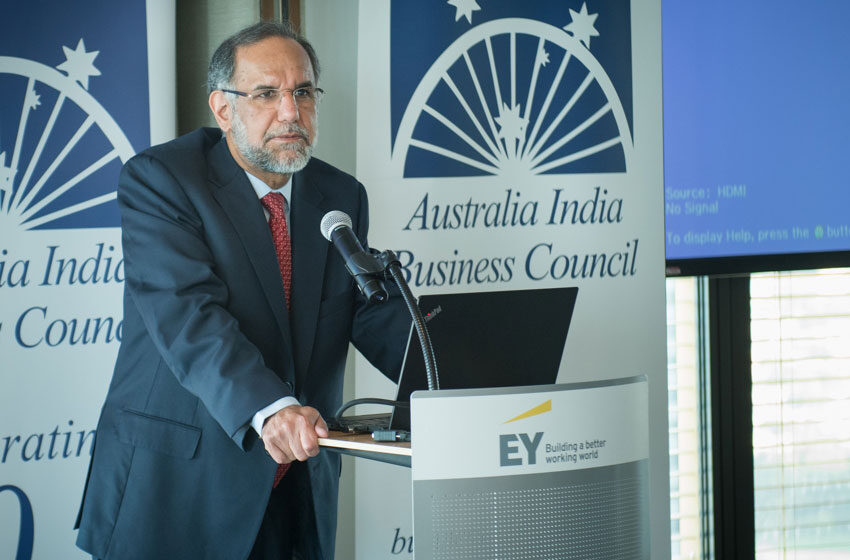 A packed house of leaders from the government, business and community joined together last week for a vibrant Australia India Business Council (AIBC) event to bid farewell to His Excellency Navdeep Suri, the High Commissioner of India in Australia. Mr Suri recently announced that he will take a new posting as Indian Ambassador to the United Arab Emirates.

AIBC National Chair, Sheba Nandkeolyar said, “AIBC had the pleasure of working with His Excellency Navdeep Suri, the High Commissioner of India in Australia on several initiatives to strengthen our bilateral Australia-India business and trade ties. We wish him the very best for his new role as India’s new Ambassador to the UAE. Visionary, strategic and very inclusive, Mr Suri will be sincerely missed.”

Ms Nandkeolyar further remarked that it was wonderful to see the Indian community coming together, along with several community leaders to bid farewell the High Commissioner. She also thanked AIBC platinum partner, CBA for their ongoing support and other knowledge partners such as EY, KPMG and PwC among others for supporting AIBC events.

HE High Commissioner Navdeep Suri shared his Australian experience. Mr Suri said, “The relationship between India and Australia has been growing very significantly in the last few years, particularly after the visit of Prime Minister Modi here in November, 2014. I am pleased also to have recently launched Confluence – Festival of India in Australia a key milestone of my short stay in Australia.”

The festival was held across seven cities in Australia and featured 72 events connecting people of different cultures, ideas and artists. Mr. Suri noted significant progress in the fields of energy and defence during his time in Australia. He acknowledged both AIBC and EY for their contributions on the energy dialogue.

During the event, Kylie Bell, EY, Director – India & ASEAN Business Group, Oceania welcomed guests and in her opening remarks reiterated that EY was proud to be the event partner, and that EY is committed to the Australia-India relationship.

Susan Calvert, Executive Director of Trade & Investment NSW, wished the High Commissioner the very best for his next assignment. She expressed sincere appreciation for the enormous contribution made by His Excellency through the Confluence Festival and other bilateral business initiatives. The NSW Government values the relationship with India, and looks forward to further strengthening the bilateral relationship.

The event also featured an address from B Vanlalvawna, Consul General of India in Sydney, a presentation from NASSCOM Australia officials Rohit Pathak and Sameer Arora. NASSCOM is an organisation representing and setting tone for public policy for the Indian software industry. During the Vote of Thanks delivered by Dr Jim Varghese, AIBC National Vice Chair, he highlighted the positive relationship that AIBC has with the Government of India, Australia and the various states. He also thanked EY for their hospitality and AIBC corporate partners, community leaders and AIBC members for attending the farewell.