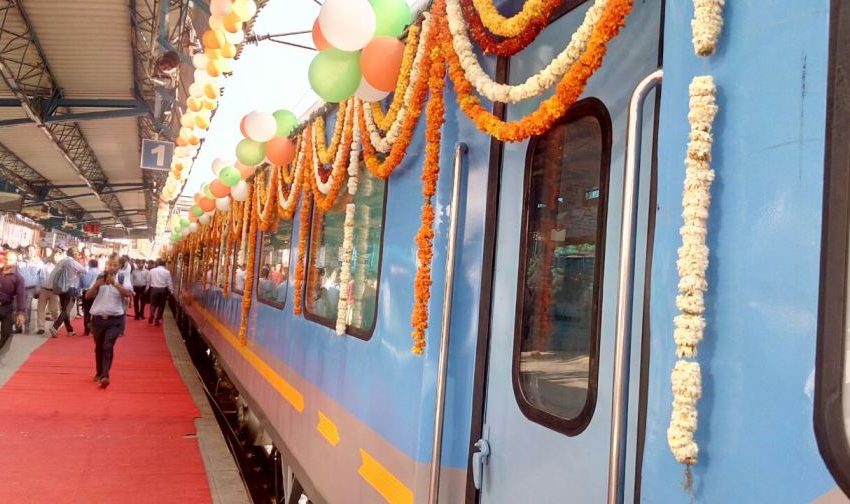 Two of India’s most visited cities, Delhi and Agra, are now connected by India’s fastest train ever. April 5 became a landmark day for the Indian railways, as it brought on tracks its latest and fastest presentation, the Gatimaan Express. With the capability of running at a speed of 160 km/h, it will cover the distance of 195 km in just one hour and forty minutes. It is a welcome and much needed move, considering the amount of tourist traffic these two iconic cities cater to.

This is the first time an Indian Raiways train has touched the 160 km/h mark. The previous fastest train was the Bhopal Shatabdi Express, which runs just a notch lower at 150 km/hr. This train though, is in stark contrast with some other trains that run on the same route and take four times more time to reach their destination, like the New Delhi-Agra Cantt passenger train, which halts at 27 stations and takes almost 8 hours to complete the journey. It is one of those trains which halt to give passes to premium trains, further extending its traveling time to almost ten hours. But of course it is really cheap, with a fare of just Rs. 45.

The fully air-conditioned Chair Car train Gatimaan Express is a rich, younger sibling of the slow passenger train, with its base fair priced at Rs. 695 and Executive Class fair set at Rs. 1,365, which is not bad at all, considering it stops nowhere in-between and offers in-coach meals catered by train hostesses. The other premium train service on this route is the Shatabdi Express, which is priced a bit lower at Rs. 540 for Chair Car and Rs. 1040 for Executive Class.

The Gatimaan Express undertook its first journey on April 5, 2016 from Nizamuddin station in Delhi at 10 am, after being given a green signal by railway minister Suresh Prabhu, who was present there for the big day, with other officials. Although, inaugural of Gatimaan definitely takes Indian Railways a step closer to efficiency and luxury, the glaring gap between the premier trains and passenger trains seems unjust, considering that majority of India’s population travels by the cheaper and slower trains. But again, such is the diversity in India’s socio-economic and cultural structure, that there are bound to be irregularities, no matter wherever you go. That is the gift and curse of India.