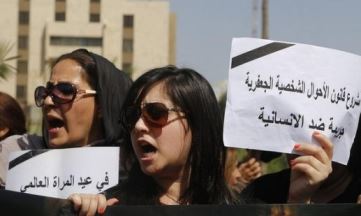 On the occasion of International Women’s Day, Iraqi women gathered on the streets of Baghdad to protest against the proposed ‘Ja’afari Law’ that would allow marriage of nine-year-old girls. The controversial law which is based on Shiite

Islamic jurisprudence will also allow the father of the children to be their sole guardian when they hit the age of two years.
The proposed law is facing world-wide criticism. Hanaa Eduar, the well-known Iraqi human rights activist said, “We believe that this is a crime against humanity. It would deprive a girl of her right to live a normal childhood.”
After Saddam Hussein was overthrown in 2003, Shiite Islamists have been leading the government of the country. The law, which has been approved by the cabinet, was proposed by justice minister Hassan al-Shimari who is also a member of the Shiite Islamsit Fadila Party. The party initially tried to pass a different version of the bill in 2003, but due to widespread protests by the secular Iraqis, the bill was never approved. Since then, the tug of war between Iraq’s secularists and Islamists became a regular feature of the country’s political scenario.
Iraq’s current personal status law preserves women’s rights regarding child custody and marriage and is often regarded as the most progressive laws of the Middle East. The final approval of the Ja’afari Bill is now in the hands of the Parliament.