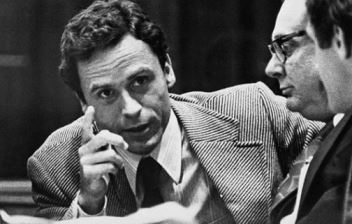 Humans are fascinated by questions that have a mysterious temperament – What really happens after death? Does heaven or a hell really exist? What about vampires and wicked witches? Most of these concepts aren’t real or seem too vague in the absence of any real evidence of their existence. But one monstrous reality that has been haunting us from several centuries is the presence of serial killers amongst us. We always want to know why they killed so many people and what kind of sinister pleasure they get out of it. Let’s explore what they said just before dying, may be we’ll get an insight of what kind of lives they lived –

Holmes was the first documented serial killer of America. He designed a hotel, specifically for killing his victims. He confessed to have killed more than 25 people inside this ‘murder castle’, but it is believed that he killed as many as two hundred people. The hotel had more than a hundred windowless rooms with strangely angled hallways and doorways that opened to brick walls. He was executed in May 1896.

Nobody knows the exact number of women Ted Bundy kidnapped, raped and kil

led during the 1970s. The American serial killer decapitated many of his victims. Some people believe he killed more than a hundred women before getting caught. He was executed in January 1989.

Also known as the ‘Killer Clown of Chicago’, John raped and killed at least 33 teenage boys and young men during the 70s. He used to dress like a psychotic clown while committing these horrible crimes. He spent 14 years on death row before he was executed on 10th May, 1994 by lethal injection.

Aileen killed seven men in a time frame of one year, during 1989 to 1990. She claimed that all her victims had either raped her or attempted to rape her while she worked as a prostitute and that, she was only trying to defend herself from these men. She was executed by lethal injection in October 2002. Aileen had a troubled childhood. Her mother was really young when she was born and her father was imprisoned for sexual offences against children.

Dahmer, who was also known as ‘The Milwaukee Cannibal’, was an American serial killer, rapist, cannibal and necrophile. He horrified people from across the world when he was captured for raping and murdering 17 men. He was beaten to death by Christopher Scarver, who was his cellmate in Columbia Correctional Institution.

While hitchhiking across Texas, French killed a motorist who gave him lift. He was sentenced life imprisonment for this act. When he was in jail, he killed his cellmate, after which he was executed by electric chair in the year 1966.

Carl Panzram was accused of killing 22 people. In his autobiography, he has confessed of raping more than thousand men, not because he was a homosexual but because he enjoyed humiliating his victims. He was hanged in September 1930.

Kurten, who was also known as ‘The Vampire of Dussseldorf’, committed a series of murders and sexual offences in the year 1929. He used to rape his victims and drink their blood after killing them. It is believed that he killed more than 60 people, including several children. He was executed in July 1931.

Sean Patrick Flanagan was executed for murdering two people. He confessed to killing two homosexual men in Nevada. He himself was a homosexual and he used to hate himself for that. In his statement he said that it was difficult for him to determine why he killed those two guys, but the thought that he would be doing some good for the society crossed his mind. He was executed in June 1989.

Also known as ‘Black Jack’, Tom Ketchum killed many people during the 1890s. He was ultimately given death sentence for committing a train robbery in the year 1892. He was hanged to death in April 1901.

Crowley’s single mother gave him up for adoption when he was born. When he learnt his father was a police officer, he developed hatred for the law-keepers. He killed several people, including a number of policemen during the 1920s. He was executed in January 1932.

He was convicted for murdering his neighbor and repeatedly raping the victim’s wife. James was connected with at least five other murder cases. He was executed in 1993 by lethal injection.

Edward Ned Kelly was an Australian runaway convict, who was considered as a folk hero by many. He was charged with three murders and a number of bank robberies. Kelly was executed in 1880.

Judy raped and killed a woman by strangulation in 1979. He also killed her three kids by throwing them in a creek. At his trial, he asked for death penalty because he had no doubt that he’ll kill again if given an opportunity. He was executed by electric chair in May 1981.

Thomas was convicted for killing two old women while stealing a small amount of money. He was executed in May 1995.