War is not something that can be easily forgotten. As a result, sacrifices made during a war also remain fresh in the minds of people even years after it is over. When you visit memorials and museums dedicated to history, you will often feel like you are transported back to those times because the experience is so real.

The United Kingdom is planning to pay tribute to the numerous Indian soldiers who fought for the British army back when the country was still under British rule. This venture has been a long time coming considering the number of hardships the troops had to go through for a country that they could not even call their home.

The idea is to install a sculpture, designed by famous British artist Luke Perry, to pay homage to the hundreds of thousands of troops who have travelled across countries to serve on the British army between the years 1914 and 1918. Titled the ‘The Lions of the Great War’, the objective of the sculpture is to honour all those soldiers who fought bravely and gave their lives in the war.

Why is the tribute of Sikh soldier memorial statue in Smethwick important?

The Indian subcontinent sent thousands of soldiers across the seas to appease the British. As a result, over 83,000 Sikh soldiers lost their lives in the war. Over 1,00,000 turbaned soldiers were gravely injured during the First World War which began in 1914.
During that time, Sikh warriors played a significant role in wars that were fought in Africa, Europe and even the Middle East. Their contributions on the Western Front during the war were crucial. Along with their fellow soldiers hailing from Britain, India and other Commonwealth nations, they made a difference. The turbaned cavalrymen are historically perceived to be fearless warriors who are staunch in their loyalty and unwavering in their determination. Even the Britishers were in awe of Sikh soldiers who would go into the battlefield and not give up till their last breath. 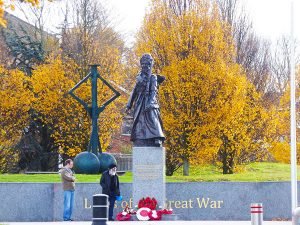 All the Details about Sikh Warriors Statue:

The 10-feet tall sculpture is made with bronze. It is the statue of a Sikh soldier and portrays him in sharp military attire. The soldier is seen wearing a turban and a traditional uniform. He is also carrying a rifle. The ‘Lions of the Great War’ sculpture is going to be released for public viewing at Smethwick, which is located in West Midlands County.
The initiative is being funded by a Guru Nanak Gurudwara which is situated locally. The sculpture will be placed on a six-foot granite rostrum that will have inscriptions all over it. The names of the regiments to which these soldiers belonged will be mentioned along with an explanation about the importance of the statue and why it can prove to be significant for this South Asian community. Ideally, the plan is to install the sculpture in a new public space that will have both seating arrangements and excellent lighting.
2014 saw the unveiling of an 8-feet high bronze statue portraying the late Squadron Leader, Mahinder Singh Pujji, in Gravesend. In 2015, a national memorial dedicated to Sikh soldiers was established in Staffordshire.
.