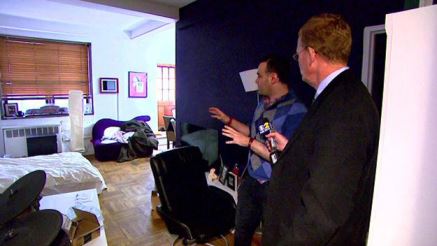 Comedian, Ari Teman wanted to make some easy bucks by renting his apartment on AirBnB as he had plans to go away for the weekend. AirBnB is a website where you can put up your property for rent even for a day or two. Teman rented out his apartment to a guy named David who said he wants the place for some of his family members who are in Manhattan to attend a wedding. Later on, the owner discovered that his apartment was being prepared to host a sex-party.
According to Teman, he handed over the keys to David on Friday evening and then went to his doorman to leave a suitcase, before going out to have dinner. When he returned to his building to get the bag, he overheard David telling people, “They’re shutting us down.” Teman asked David what’s being ‘shut down’? The question made him nervous and embarrassed at the time, which made Teman suspicious about David’s intentions. In an attempt to find out what’s going on, the proprietor verified David’s address and phone number on Google.
Soon, he found a tweet posted in February advertising some sort of sex-party called, ‘BBW Panty Raid Party’ which was to be held in New York. The advertisement has David’s phone number posted next to a sleazy picture. Teman rushed back to his apartment and found it in shambles. As per his Tumblr post titled, ‘Dear AirBnB, no thank you for the XXX Freak Fest’, a group of people congregated at his apartment and started to rearrange his furniture and other belongings, causing damages that’ll cost him more than $87,000.
Teman said his first reaction was, “Oh I’m being robbed by a large crew. And they’re fast. You can’t get a New York City moving company to move that fast. I’m going to throw an orgy next time I need to move”. He had to call the cops to his apartment to remove all the people who were gathered at his place. Teman, who has maintained a sense of humour throughout this nightmare situation, praises AirBnB for their quick response. The company has wired him $20,000 and they’ve arranged his stay in a hotel. Representatives from AirBnB immediately sent a locksmith to change the locks of the apartment and are doing whatever they can to put an end to Teman’s ordeal.
The company has issued the following statement to Business Insider –
Over 11 million guests have had a safe and positive experience on AirBnB and problems for hosts and guests are incredibly rare, but when they happen, we try to help make things right. We were appalled when we learned about this incident and we took immediate action to help this host. The individual who rented this space has been permanently removed from our site. We’ve reimbursed the host for damages to his apartment and ensured he has a new place to stay. In the days ahead, we’ll continue to work with the host to assist him with his additional needs and we will work cooperatively with any law enforcement agencies that investigate this matter.