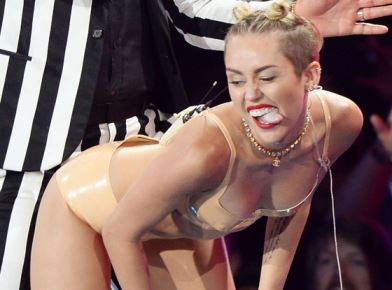 From “Gotta keep my head held high, there’s always gonna be another mountain” to “ To my homegirls here with the big butts, Shakin it like we at a strip club” Miley Cyrus was slowly hinting where her music is taking her. If these lyrics weren’t insinuating enough, her latest performance at the 2013 Video Music Awards made it all so obvious. The 20 year old former teen star thought it was time to show the world she isn’t the cute and adorable girl next door anymore. Her twerk filled performance with Robin Thicke in which she dons a nude colored body hugging two piece outfit and shakes her booty throughout has gotten her more negative publicity than she would have aimed for. The audience had their jaws dropped, some in shock, some in awe and some in sheer disgust and embarrassment. Bluntly put, her attempt at pulling off a raunchy number looked more like a performance on crack and the media did not spare any second of it. The iconic foam finger she used as a prop has become a thing of pop culture already.
This is not the first time a teen star has gone out of their comfort zone and done something extremely surprising in order to regain attention they might have lost over the years. The overhype resulting from these publicity stunts proves that it still works. Britney, Madonna and Lady Gaga have already pulled off enough gimmicks to keep the music industry entertained and Miley seems to be following in the footsteps. Growing up years can be difficult, especially if you have been under the spotlight from a very early age. Where the industry has seen some youngsters grow up to be even better adults, it has also seen many blooming stars turn out to be a train-wreck in later years.
More than the performance itself, the reaction it has got from the crowd sitting in the audience has been well documented and circulated, the most famous one being the Will Smith family’s reaction. Rihanna seemed to be in deep thought throughout the performance and did not show much surprise, looks like she must have been expecting something similar. And what does Miley get for putting in so much effort and twerking non-stop for the entire song? A handful of internet memes! Yes, the internet is having a good time posting pictures of her in hilarious memes and captions mocking everything from her tight outfit to her tongue sticking out the entire time.
Miley on the other hand does not seem to understand why the whole world is taking it so seriously. In her support she says that it’s been done before countless times and everyone is thinking way too much about it, more than she even did while performing it. Whatever the case, she has sure succeeded in getting the highest number of tweets and an amazing amount of internet searches to her name already making her part of internet and music history.
There are many ways of getting attention and twerking one’s way to popularity sure doesn’t sound like a good way of doing it. Disney would definitely agree.