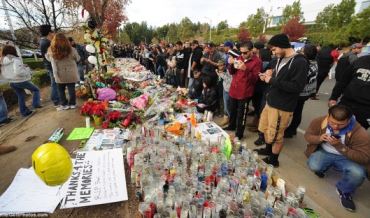 which was organized to pay tribute to Paul Walker at the site where his Porsche crashed on 30th November last year. Thousands of fans gathered at the crash site a few months ago with candles, letters, message boards, photos and flowers, while some fans brought car parts and bottles of beers.
The crash site is often visited by fans, who are owners of cars like Audi, Porsche and Mustang. Every now and then, you can also spot sports-bikers revving their engines in a deafening salute. People travel from as far away as New Mexico and Oregon to pay tributes to their favourite star, who earned immense fame and success by portraying the iconic character, Brian O’Conner in the ‘Fast & Furious’ film franchise.