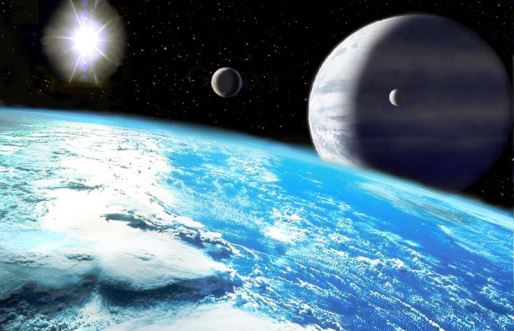 Three-quarters of our planet’s surface area is covered with water. If you measure in volume, the amount of space covered by land is just a tiny fraction of the amount of space covered by water. Given this fact, it should not be surprising that we unearth unknown mysteries from our seas and oceans much more regularly than we do on land.
Take for instance the Bimini Road of Bahamas. During a diving expedition off the coast of Bimini in late 1968, a group of friends discovered ‘a long, pavement-like structure’ lining the ocean floor that looked too ordered to be natural. Now dubbed the Bimini Road, these structures are built of round stones of varying thickness and sizes stretching end-to-end over a distance of miles. At the end of this tabular road is a pronounced hook, like that of a fishing line or of the letter ‘J’. Though scientists studying the structure have concluded that it’s a man-made formation, they’re yet to discover the purpose of it and how it came to be submerged by water. While this one piece has been unearthed, the larger picture it was once part of still remains a puzzle.
At other times, some lucky archaeologists discover not just pieces but entire puzzles themselves, completely intact. This is what happened when Frank Goddio, a Frenchman on the lookout for submerged warships from the eighteenth century, stumbled upon a floating statue of a face in the Mediterranean Sea. This led to the remarkable discovery of an entire city called Heracleion, which is mentioned in a few ancient texts. Sixty-four ships buried in the ocean mud, giant five-meter-tall statues, and ancient Greek and Egyptian tablets were part of the findings. Scientists gleefully admit that there is enough material in these immersed ruins to keep them busy for the next 200 years, which is amazing even allowing for some exaggeration.
Some discoveries stump the mind, like the Baltic Sea Anomaly, or as others prefer to call it, the Baltic Sea UFO. We’ll not argue here the logic behind tagging a submerged, stationary item with the verb ‘flying’, but if reports are to be believed, its circular formation reminds one of flying saucers. From the two expeditions that exploration teams have taken to it, it contains a formation like a staircase and a black hole leading to the interior of the structure. Many naturalists explain the object as either an outcropping of a submarine or a gun turret from an old battleship. However, the counterpoint is that the formation consists of unnaturally straight lines and seems to be made of limonite and goethite, materials seldom found in ocean depths.
Continuing the theme of submerged cities, here’s

one of a submerged land area. During the last Ice Age, Europe and Britain were connected to another by a land mass called Doggerland, which has since gone under water. The first clue that water in this area could hold interesting things came in 1931, when a passing cargo ship pulled out a barbed antler. Since then, many remains of mammoths and lions, and also a number of tools dating from that period have been unearthed. Why, even a Neanderthal skull has been found in these waters in 2008, which has been established to be about 40,000 years old.
Some say that looking up into the night sky is like taking a trip millions of years into the future. Paradoxically, travelling down to the depths of our seas and oceans is sometimes like going way back into the past. In 2011, a group of researchers experienced this truism first hand when they discovered ancient fungi in the Pacific Ocean dating back over 100 million years. The big mystery is that they’ve been found in sediments that have been nutrient-deprived for millions of years, and yet they continue to survive. What’s more, it was found that these fungi belong to the Penicillium gene, which means that it’s very like that we’ll find applications for these plants in fighting bacterial diseases.
The mysteries don’t stop with non-living things. Deep sea life is an ever-expanding field, and scientists who have made studying the deep seas their professions insist that there is so much to discover that they cannot do enough even in their lifetimes. From the Dumbo Octopus – with elephant-like ‘ears’ – to the Yeti crab – which live among the hydrothermal vents – from to Neocyma – a bizarre, orange, elongated animal that lives at depths of 2000 meters – to the transparent sea cucumber – which lives by sucking detritus-rich sediments into its mouth – life on the ocean floor is rich, varied and sometimes downright bizarre.
Sometimes in our temptation to look above us at the stars and planets, we forget that there are still vast swathes of space on our planet that we have not explored. Before man reaches for the stars, it is more likely that he will take to the seas. So let’s hope that the people involved in studying the oceans continue to discover Earth’s many secrets, because one day, some of them may save our very species from extinction.