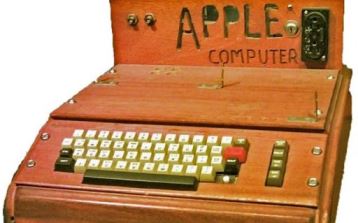 Apple 1 was the first computer that was made by Steve Jobs, the former CEO of Apple computers co. This computer came with a revolution as it changed the whole concept of using computers only for work. It facilitated the common users with their personal computer. Apple made 200 of these computers and it’s reported that only 6 of them are still in working condition. This one that is sold for $374,500 in an auction is also one of those 6 computers that are still working in good condition. It was estimated that it doesn’t worth more than $180,000 but when this computer was sold on this huge price, Sotheby’s auction committee was also amazed. This computer isn’t like the modern Apple computers and it only includes a mother board without any cover or casing, few microchips and all the circuits are exposed without any covers. This one of a kind piece of machinery was manufactured by Steve Jobs and Steve Wozniak.