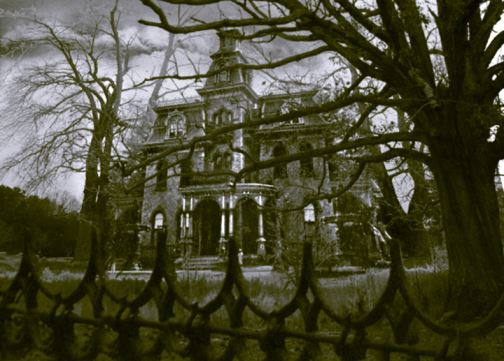 Have you ever felt the presence of another being even when you were all alone? Does the idea of going into the dark make you think twice? We have all experienced something in our lives that makes us believe there is something other-worldly out there. There are countless stories from all over the world that make even the sceptics doubt themselves. While some of us avoid all such circumstances where fear would take the best of us, some chase it just for the thrill. The world of the living is sometimes invaded by the world of the dead to constantly remind us of their existence. To know about these mysteries just adds another dimension to our logical thinking.  Here are the ten scariest places in the world to give you goose bumps and keep you wondering:

Below the streets of beautiful Paris is a horrifying truth. There is a network of tunnels known as the Catacombs that contain the remains of around six million people. The walls of these tunnels are lined with bones and skulls as far as the eyes can see. The catacombs were built in the 18th century, initially as stone mines and later as an ossuary. It is said that the cemeteries within city limits, especially the Cemetery of the Innocents, was overcrowded and became a nuisance to the locals. It had been in use for ten centuries, hence the government decided to limit further use of it. These stone quarries were chosen to store the remains of all those buried there. The Catacombs today are open to public viewing and are a sight to behold as the millions of bones crammed into the small tunnels have been silently resting there for centuries.

To get an idea of what a real ghost town would look like, one must see the town of Pripyat in Ukraine. This town has been abandoned for the past 20 years, not even a single soul wanders around its parks, streets and buildings. Snow, trees and silence have taken over this once bustling town. Pripyat was one of the most unfortunate towns to have been affected by the 1986 Chernobyl disaster. It was inhabited mainly by the people working in the power plant. The accident leaked so much radioactive material into the air that the entire town had to be evacuated within two days of the disaster. The place has remained untouched since. No one has the permission to enter its premises without government approval.

Who would have thought that at the base of the beautiful Mount Fuji is a forest that no one wants to enter, unless you want to die. The Aokigarah Forest is known for being one of the favourite suicide spots of the country. The quiet and eerie trees are as scary during the day as they are at night. You might stumble upon a decaying corpse after every few steps. The dense trees and shrubs offer an ideal place to commit suicide, most commonly by hanging oneself. Several bodies have been found half decomposed inside the forest and several remain to be found yet. The forest is so creepy that even animals refuse to tread in it. Hearing a bird chirp inside this forest is a rare thing. The dead silence speaks of those people who chose to end their lives here.

Gettysberg in the U.S. is considered one of the most haunted areas of the country. Centuries ago, in 1863, more than seven thousand American Union and Confederate soldiers lost their lives in this area. The place has been haunted by their souls ever since. Numerous sightings have been reported. Inns where these soldiers once stayed are the most frequented by these ghosts. The ghost of a little boy named Jeremy is seen at the Farnsworth House Inn. Several people have encountered spirits dressed in Civil War clothing here.

The Vaults at Edinburgh situated in the arches of the South Bridge have a story of their own. Built to house tradesmen and materials in the 1700s, these vaults became home to slum dwellers as the condition of the place deteriorated over time. By the 1800s it was believed that the conditions were so bad that even these people moved out, leaving the vaults barren. The truth was, some of the city’s poorest of the poor still lived in them. These people became the prime targets of criminals Burke and Hare who would kill these poor souls and sell their bodies off to medical students. The vaults have seen numerous murders of helpless people whose souls would perhaps never rest in peace.

America has a number of swamp regions, however the Manchac Swamp in New Orleans, Louisiana is different. The misty, quiet and spooky place is supposedly home to some unexplained creatures and the spirit of a woman who was said to be a voodoo princess. Apart from the alligators in the swamp that are enough to take your life if you are careless, legend has it that the place is frequented by the deadly Rougaru, a werewolf-like creature. The other story associated with the swamp is that of Julie White, who was said to be singing the destruction of the town and predicted it would happen when she dies. Strangely enough, on her funeral day in 1915, a devastating hurricane struck the entire region and destroyed many towns.

Who isn’t aware of the story of Count Dracula made famous by Bram Stoker in his novel. The inspiration for this legendary story came from Romania where the Bran Castle stands tall atop a peak between the Bucegi and Piatra Craiului mountains. People till today wonder whether the story as narrated in the novel was actually true or just a figment of the author’s imagination as the Castle and its occupant, Vlad the Impaler were both equally mysterious and intriguing. The castle has endless labyrinths, tall spires and chambers good enough to hide any being or creature. Stories of Vlad’s ruthless ways of punishing anyone who went against him still makes people shiver. The Castle attracts tourists from all over the world wanting to experience and figure out the truth behind this vampire legend.

Among the Micronesian Islands in the Pacific Ocean lies the Chuuk Islands which houses the infamous Truk Lagoon. This picturesque lagoon hides a bitter truth at its bed.  It is the biggest graveyard for wrecked ships in the world. More than 50 shipwrecks and hundreds of planes have sunk in this shark infested area killing nearly three thousand people. Today, divers experience paranormal activity around these broken ships. Most common is the sound of engines turning on despite no ships being present on the surface of the water. There is also recorded evidence of these mysterious happenings. Some divers have also heard sounds of metal grinding and machinery near the Fuji Kamawaru Shipwreck. The engine room of this ship was found to contain a number of human remains.

Cemeteries all over the world are notorious for being haunted and so is the Greyfriar’s Cemetery in Edinburgh which is situated in the middle of the town, not very far from the Royal Mile. Greyfriar’s is different as most of those who are buried here have had a torturous death. It is known for being the burial ground for people persecuted at the Covenanter’s Prison by the “bloody” George Mackenzie. It is also said that the spirit of George himself haunts this place very often. It is not just the ghost sightings that make this place scary; people who visit it have had unexplained experiences. They admit to feeling weird as well as awed by the place in general. It might be the ambience with its gothic statues and tombstones or the presence of something completely supernatural.

One of the oldest and most perplexing mysteries of the world is the statues of Easter Islands. The gigantic faces that are as tall as thirty feet and weigh several tonnes are found all over this tiny, isolated island. The Easter Islands were discovered by a Dutch sailor in 1722 off the coast of Chile in the South Pacific Ocean on the day of Easter hence giving it the name. The islands are far away from the rest of the island groups and the nearest island to it is also around 1400 miles away. This small piece of land was almost uninhabited at the time of its discovery, yet these hundreds of statues stand tall on it, facing the same direction. No one has been able to explain where these enormous monoliths came from or why they have been placed there. It is practically impossible for humans to assemble such huge rock structures without any external help. Despite all the hypothesis and theories that have been published, no one knows for sure whether any are actually true. Research is still on to figure out the mystery behind these humungous structures while it continues to astound tourists from all over the world.