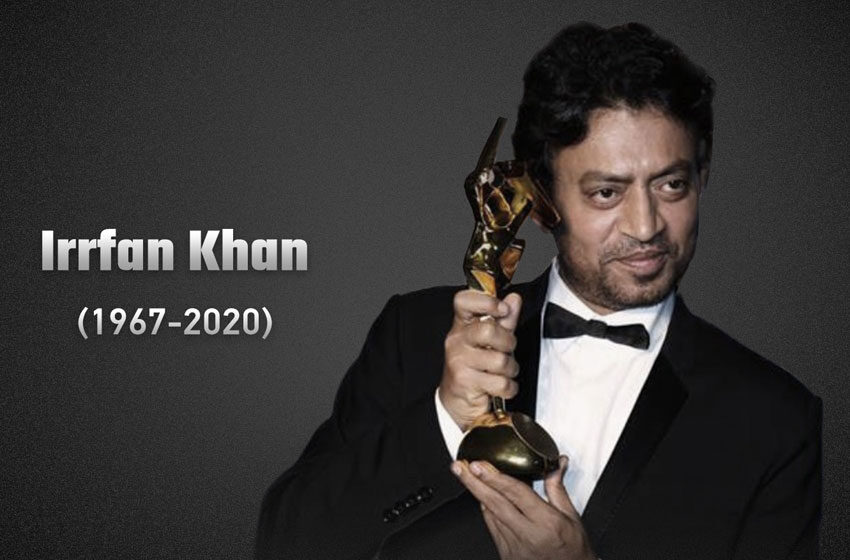 Remembering a legend of mimpactful acting

The Indian cinema has lost a gem, and the world has lost a star. After struggling with a Neuroendocrine tumour and going round for round with aggravated health conditions, Irrfan Khan has passed away at the age of 53.

To pay him a tribute and to remember the legend the man was, in this article, we will talk about Irrfan’s life, movies, achievements, and more. Let’s dive deeper into the sea of art that Irrfan created and recognise the impact the star has left on the world.

Born in Rajashthan into a family of Pathan ancestry, Irrfan Khan was raised in the Tonk district and then in Jaipur. His father owned a tyre business there. He was talented even as a child and was eventually selected to play cricket in the under 23 categories for CK Nayudu Trophy. However, he could not attend it due to the lack of travel expenses.

Irrfan Khan’s interest in acting was irked by his maternal uncle, who was also a theatre actor. Khan was a part of several plays in Jodhpur during his time there. After completing his MA in Jaipur, he decided to move to Delhi to join the prestigious National School of Drama in 1984.

His acting career started with a small role in Mira Nair’s Salaam Bombay in the year 1987 after he graduated from NSD. However, his scenes could not be a part of the final cut of the film.

He then began his television journey in a Doordarshan teleplay called Laal Ghaas Par Neele Ghode, in which he played the character of Lenin. This play was made loosely on the translation of a Russian Play penned by Mikhail Shatrov. He acted in several television shows throughout the 90s. Some of the notable ones were Chanakya, Shrikant, Bharat Ek Khoj, Banegi Apni Baat, AnooGoonj, The Great Maratha, Sara Jahan Hamara and Jai Hanuman in which he played Valmiki.

Irrfan Khan found his success with the 2001 film The Warrior. In 2003 he acted in the critically acclaimed film Maqbool which is a rendition of Macbeth. Critics immensely appreciated his acting in Rog in 2005. In the year 2007, he was seen in hit movies The Namesake and Life in a Metro. His brilliant timing and chemistry with Konkona Sen Sharma in the latter were not only liked by all but also got him the Filmfare Best Supporting Actor Award that year.

Irrfan was a veteran with around 80 films under his belt. The man was responsible for popularising the ‘minimal’ approach to acting in India on a big scale and has paved the way for dozens of new actors. They are contributing to the cinema landscape currently. Here are some of his notable mentions – just the tip of the iceberg that is his magnificent, rich movie career.

Going by ‘Pi Patel,’ Irrfan plays the protagonist’s older self. His main contribution to the movie, however, was the narration. The film is well-recognised around the globe and has won several awards as well.

Made by none other than the legendary director Danny Boyle, Slumdog millionaire bagged Academy awards, Golden globes, British awards, and more. Irrfan played a police inspector who tussles with the main protagonist.

Irrfan plays Rajit Ratha, who is a scientist and is one of the main reasons for the creation of the main villain of the movie.

Irrfan plays the CEO of Masrani Corp and the owner of the Jurassic World, Simon Masrani.

Based on real events and inspired by real-life incidents, Irrfan’s performance in this movie is truly a gift to Indian cinema. He plays Pan Singh Tomar – an athlete who is forced by the system’s injustice and the lack of necessities to become a dacoit.

Asif Kapadia’s directorial debut, The warrior, was where Irrfan got the recognition that any actor dreams of. He played a strongman by the name of Lafcadia, who has left the ways of violence behind.

Vishal Bharadwaj’s Maqbool is still considered as one of the best movies to watch Irrfan’s acting chops in. The film is an excellent adaptation of Shakespeare’s Macbeth

He stole the show and made an everlasting impression on the audience with his minimal acting. He played a widowed accountant by the name of Saajan Fernandes – a common man who, by chance, would end up having an affair with a housewife.

Irrfan played Rana Chaudhary – a Delhi-based cab driver who would later become a romantic. The movie showed his serious side as well as a humorous persona.

Irrfan Khan has received many awards and recognitions for his brilliant performances throughout the years. Here are some notable mentions.

He worked as an AC repairman
Even after having a diploma in dramatic arts and having studied at the National School Of Drama, Irrfan’s life didn’t go exactly as planned. When he landed in Mumbai, he had to repair air conditioners for a living. It’s said that one of the first houses he would visit belonged to Rajesh Khanna.

He was a bit of a perfectionist

He would pay a lot of attention to the script’s details. Sutapa Sikdar, Irrfan’s wife, said that he got her to re-hash and re-write the Banegi Apni Baat‘s scripts up to 11 times to make sure everything was real, vibrant, and perfect.

THE PASSING OF A LEGEND

It was public record that Irrfan had a neuroendocrine tumour, and he was admitted to the intensive care unit of Kokilaben hospital (Mumbai) on April 28th, after kidney issues and a colon infection. He had struggled with cancer for two years before his death, even completing a project in between – a movie named ‘Angrezi medium.’

What is a Neuroendocrine Tumour

It is a condition that severely affects the neuroendocrine system and damages cells. These tumours can be cancerous and can form on any part and organ of the body, including lungs, the Gastrointestinal (GI) tract, and pancreas. The survival rates of 5 years for neuroendocrine cancer can be as high as 90 per cent, provided the condition hasn’t spread to other parts of the body.

Sadly, Irrfan’s mother, Saeeda Begum, has also passed away on April 25th in Jaipur at the age of 95. Irrfan had to attend her funeral over a video call because of his health condition.

Despite being not just a national treasure but also an internationally recognised talent, Irrfan was a humble man who lived his life with integrity.

The Prime Minister expressed his grievances by stating that his death is “a loss to the world of cinema and theatre.” He added that the nation would forever remember Irrfan’s versatile performances across diverse mediums.” Arvind Kejriwal, the Chief Minister of Delhi, stated that Irrfan was one of the most exceptional actors of his time.

Amitabh Bachchan stated that Irrfan’s passing has left a huge vacuum in Indian cinema. He added on to remember him as a gracious collaborator and an incredible talent.

Actress and fellow legend Shabana Azmi stated that it was amazing how he bravely fought cancer and that his sudden loss deeply saddened her.

Priyanka Chopra stated that his charisma was pure magic and that her condolences are with his family, sharing a still frame from 7 Khoon Maaf – the movie they starred in together.

Filmmaker Karan Johar thanked Irrfan for irrevocably raising the bar for artists and for enriching the Indian cinema.

The nation is in shock – the kind that settles in slowly and the vacuum he has left in not just the Indian cinema, but also our hearts, can never truly be filled. We hope that as the gates of heaven welcome you, your soul finds peace, and may God give us the strength to move forward.

And once again, thank you, Sahabzade Irrfan Ali Khan, for showing us what true art looks like and to fill our lives with joy. Your work is immortalised on film as your name is forever etched in the history of Indian cinema.