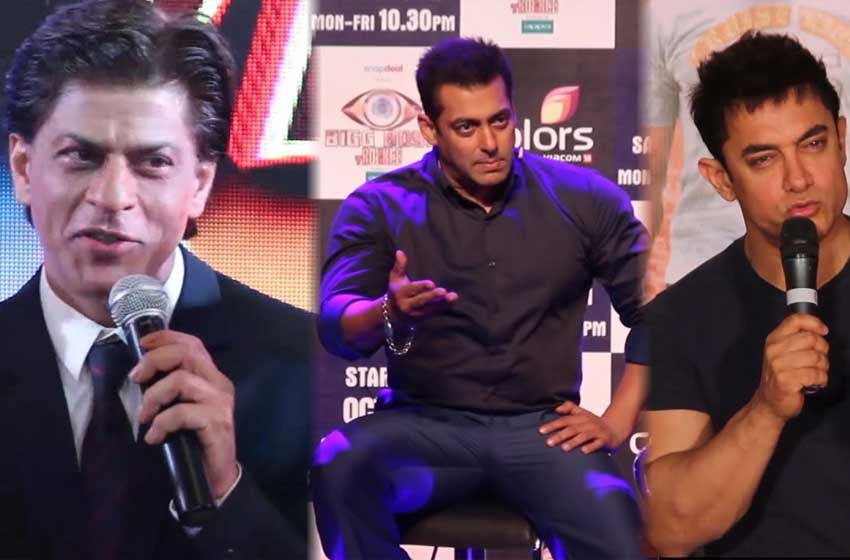 The Khans of Bollywood celebrate their fiftieth birthday this year. They have ruled the roost for twenty-five years, and yet they show no signs of slowing down. We take a look at what keeps them going, and what they’re busy with through this momentous year.
This year, in 2015, the three musketeers of Bollywood turn 50.
Aamir, Shahrukh and Salman, who share the surname ‘Khan’ (they’re not related), have ruled the Hindi movie industry for a good part of twenty-five years now, and they’re not showing any signs of ageing or plans of retirement. While their leading ladies from the nineties have gradually faded away from the limelight (think Kajol, Juhi Chawla, Madhuri Dixit, Preity Zinta), the men have strode relentlessly on, defying laws of nature and continuing to romance the prettiest young things in the circuit.
Aamir Khan, who was the first to turn 50, on March 14, says that, 18 or 50, it’s all just the same for him. “My son is 21, my daughter is 16. I feel I am younger than my son. He is much more serious than I am. And I have a son who is three now and I am as comfortable with him. Even children haven’t aged me.’ The perfectionist does not have a movie lined up for this year, but work for his movie Dangal, has already begun. In this film, he appears in two starkly differing avatars: one as an ageing fifty year old wrestler, and the other as a twenty-seven-year-old muscular young man.
For Shahrukh Khan, life is a lot busier. Not only is he busy shooting for the new TV show, India Poochega, Sabse Shaana Kaun, he’s also involved with Maneesh Sharma’s film, Fan, which stars him in a dual role of both superstar and fan. Then he will move on to Rahul Dholakia’s Raees, set in Gujarat, where he plays a thief to Nawazuddin’s cop.
Salman is shooting for Kabir Khan’s Bajrangi Bhaijaan, in which he plays a Muslim in love with a Brahmin girl and also goes back to playing Prem in Sooraj Barjatya’s Prem Ratan Dhan Paayo.
Their biggest contribution to Indian society and way of life at large has been outside of cinema, though, with the ease and comfort with which they have worn the Khan surname, without apologies but not with undue pride either. In their own small ways, they have shown through their lives that the idea of India transcends religion.
And of course, we all hope that they continue to defy age and entertain us for fifty more years. At least.