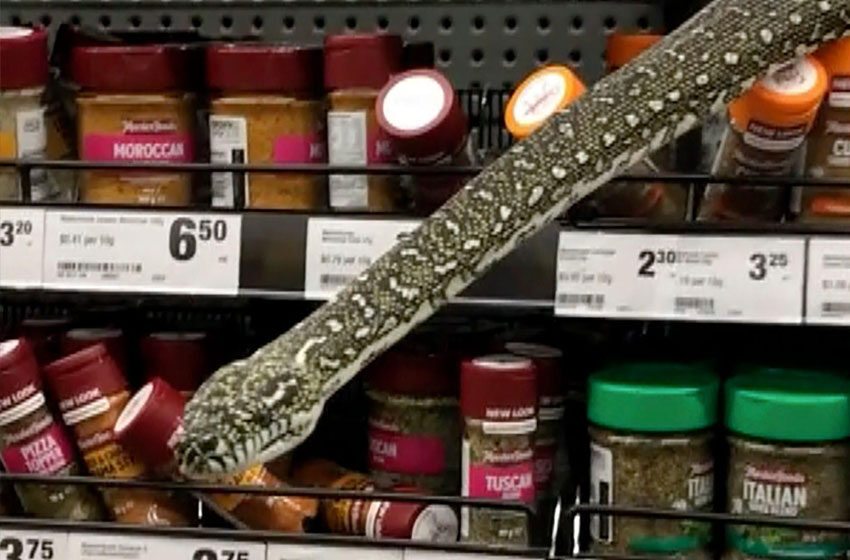 What was supposed to be an ordinary Monday for shopper Helaina Alati became eventful when an uninvited ‘visitor’ sneaked in one of the shelves in Sydney’s supermarket. Alati was looking for some spices when she suddenly saw a large snake just twenty centimetres away from her face. According to Alati, the diamond python was initially curled up behind the pile of spices, so other shoppers might have come past it. She added that the three-meter diamond python was friendly and just wanted to say hello.

Woolworths’ spokesperson said that the staff immediately cordoned off the area for the customers’ safety.

Alati, who used to be a volunteer snake catcher, hurriedly retrieved her equipment from the house nearby to safely remove and rescue the non-venomous snake. She immediately released it to the bushland, saying the snake was not defensive and just slithered right inside the bag. She also described the snake’s behaviour as chill and not aggressive at all.

The Australian Museum says that the diamond python is usually found in Sydney’s bushland and national parks. However, they sometimes go undetected because they are slow-moving and are nocturnal.

Alati, who is used to seeing and catching snakes in unusual places, still finds it uncommon to spot them in supermarkets.

This type of snake, however, is not any more common in Sydney than it was before. The animal is not considered endangered, but its habitat is under pressure.

Most people would surely freak out when a snake suddenly appears in front of them in an unusual place like Woolies. However, the Australian Museum explained that pythons are non-venomous, but they can cause a painful bite. Their teeth can break off and remain embedded in the victim.