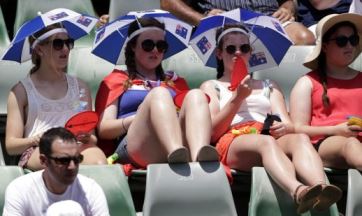 Touted as one of the most demanding sport events, Grand slam Australian Open is all about high octane tennis lasting for hours, grilling and testing the finest player

s out there. Add souring heat to this adrenalin pumped event, things get a lot tougher for players trying to establish their domination between the nets.
2014 Australian open in Melbourne became a victim of scorching heat when temperature ran into 100s leaving players drained and disgruntled.
Frank Dancevic of Canada collapsed apparently after seeing “Snoopy” on the court. China’s Peng Shuai vomited on court because of gruelling weather conditions. Caroline Wozniacki claims her water bottle melted due to heat around the court.
While some labelled the conditions as inhumane and unfair, Roger Federer considers the whole situation as a mental thing rather than physical one and calls for laser sharp focus on the game considering things are same for both the players on the court.