March 15th will go down as one of the darkest days in the history of New Zealand. A day where an ultra-peaceful country had its deadliest terrorist attacks, sending shockwaves across the world. The people of New Zealand showed extreme solidarity. New Zealand leaders showed the world how to look right in face of terrorism and say “You will not divide us, you will not break us”
It was during the Friday prayers on March 15th, 2019, when Australian-born Brenton Terrant attacked two mosques in Christchurch and shot around 50 people at close range. According to reports, a total of seven Indians were among the fatalities of this cowardly attack. Reportedly, four were from Gujarat and three were from Hyderabad.
Post attack, the Immigration New Zealand set up a dedicated webpage to speed up the visa facility for the families of the Indians. Four people were from Gujarat and three from Hyderabad people two have been killed and one got injured in these attacks. There was a father-son duo from the Vora family. Identified as Ramiz Vora and Asif Vora, leaving behind Asif’s four-year-old daughter and a newly-born baby.
The other identified victims were Maheboob Khokhar, Ansi Alibava, and Ozair Kadir. 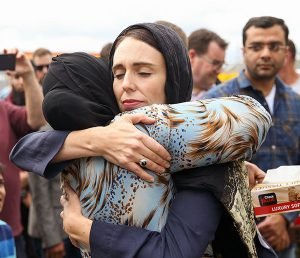 New Zealand Prime Minister, Jacinda Ardern, condemned this cowardly attack and classified it as a terrorist attack. Local NZ authorities immediately took action and stood shoulder to shoulder providing support and solidarity towards the family of Christchurch attack victims. Jacinda personally met the families of the victims and shared some emotional moments with them. This humanitarian touch of the Prime Minister Jacinta Arden left a touching impact on the lives of victims’ families, and stood as a testament to the leaders of the world. A few days later, at her speech at Christchurch Memorial, Jacinda addressed a crowd of thousands with the following golden words.

“What words adequately express the pain and suffering of 50 men, women and children lost, and so many injured? What words capture the anguish of our Muslim community being the target of hatred and violence? What words express the grief of a city that has already known so much pain?
I thought there were none. And then I came here and was met with this simple greeting. Assalaam Alaikum. Peace be upon you.”

They were words spoken by a community who, in the face of hate and violence, had every right to express anger but instead opened their doors for all of the world to grieve with them.

The International Reaction was of Instant Praise and Solidarity

The entire global community responded and reacted to this act of terrorism in the strongest possible way. Calling it as the latest example of rising racism and Islamophobia, the Turkish President Recep Tayyip Erdogan condemned the attack. On the other side, US President Donald Trump in his tweet sent his warmest sympathy and best wishes.
While condemning the attack, the UN Security Council called it as heinous and cowardly and said acts of terrorism were criminal and unjustifiable. While warning against the rise of extremism in the West, Lebanon’s Foreign Minister Jubran Bassil said such incidents put communities at greater risk. Indonesia, the world’s biggest Muslim-majority community, sent out its deep condolences to the victims and the families.

Support for Deceased and Injured

The Government of Australia and New Zealand have already set up a helpline to report the incidents of extremism. The whole objective of this moment is to avoid the hatred of violence and make the residents more vigilant about such incidents. This is a great step towards spreading the message of peace and encourage people to be a part of national peace.
Such terror incidents are a great loss to humanity and spread hatred amongst the communities. To deal with such a scenario, there need to have collaborated efforts between the citizens and the government. At the global level, it needs to be reacted with strong global initiatives.

The Need to Prevent Violence and Hatred...